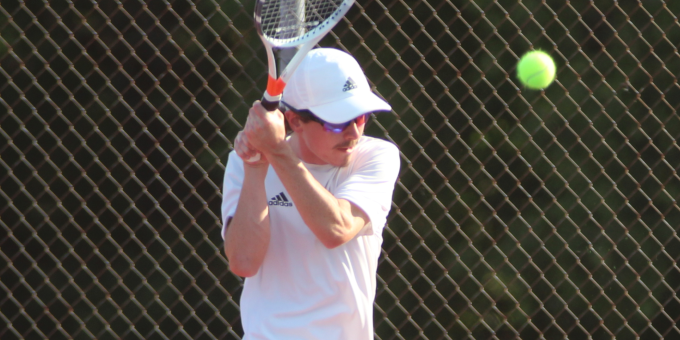 ELLETTSVILLE – Edgewood won a tight three-set battle at No.1 doubles while squeezing out a 3-2 win over Bedford North Lawrence during boys high school tennis action in the regular-season finale on Monday.

The Mustangs recorded the deciding point as Zeke Weisner and Dane Weisner rallied for a 5-7, 6-3, 6-3 victory over Jayden Kemp and Drew Stephenson.

BNL’s wins came from Graham Turner (6-3, 6-0 over Mitch Deckard at No.1 singles) and the No.2 doubles duo of Nate Pemberton and Carter Kimmel (7-6, 6-1 over Austin Nunn and Dannie Chandler).

“It was disappointing not to get the win tonight, but it was a good close match and I felt like both teams played well,” BNL coach Chris Kurtz said. “Really solid work from Graham, and two doubles has developed into a very tough duo.”

BNL (5-15) also learned its postseason fate when the IHSAA released the sectional draws on Monday. The Stars face Bloomington North in the first round of the sectional at North on Tuesday.

“It will be the toughest test yet,” Kurtz said. “I’m hoping the guys play loose, without fear, and live in the moment.”