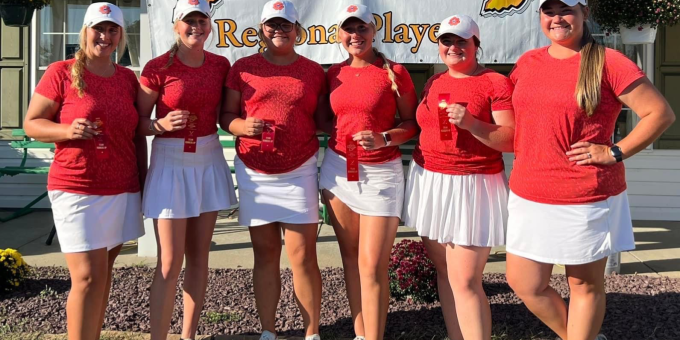 MONTGOMERY – On the inside, Bedford North Lawrence’s young golfers were shakin’ and tremblin’. But on the golf course, the Stars kept their composure. They played all day and didn’t let nothin’ get in their way, keeping the beat and earning a return trip to the promised land.

For the first time since 2018, BNL is returning to the IHSAA state championships. The No.17 Stars finished second in the regional at Country Oaks on Saturday. The top three teams, plus the top two individuals who are not members of qualifying teams, advanced to the state tournament at Prairie View on Sept. 30-Oct. 1. The finals, featuring 18 teams from six regionals, will not include a first-round cut.

No.2 Castle won the regional with a sensational score of 296. The Stars, projected as a pre-tournament favorite to advance, settled into second with 344, while Gibson Southern shot 355 and claimed the third team spot on the fifth-player tiebreaker with Jasper.

There was shaking, because BNL’s scores were uncomfortably higher than expected or wanted. There was sweating, because a two-shot cushion (for second place) at the turn wasn’t too comfortable, either. When the dust settled, the Stars had gone through all that angst and worry for nothing. They were comfortably in the state field.

“I was definitely watching the scores, it was a little nerve racking,” BNL coach Kori Johnston said. “But they got it done. It was all about composure, and they did a fantastic job of that. We weren’t happy with our scores, but scores were high today for everyone. We just had to be slightly lower. Just maintain and stay steady.“

Chloe McFaddin paced BNL with an 81, while Ellie Horton carded 84. Kenley Craig (86) and Kinleigh Root (93) capped the team scoring as the Stars qualified for the finals for the ninth time in program history.

“I walked in, shaking bad,” McFaddin said. “I knew I could have done better than what I did. I was worried my score would be part of the problem. I tried to keep in mind that it was that way for everyone, but it was hard. This is extremely exciting, I’m super proud of everyone on the team. We followed through and got things done.”

BNL shot 327 while winning its 10th straight sectional title (at Otis Park) and had won the Washington Invitational at Country Oaks earlier this season, so that experience played a factor.

“It was playing a little longer, the tees were backed up from what we normally play during the season,” Johnston said. “That, combined with nerves, could be why scores were higher. Our ballstriking wasn’t great, but we got it done. We did a good job of recovering from any bad shots we had.

“It feels awesome. This is my first trip to state, too. Now I get to go as a coach, and I’m pretty excited about it. I couldn’t be happier.”