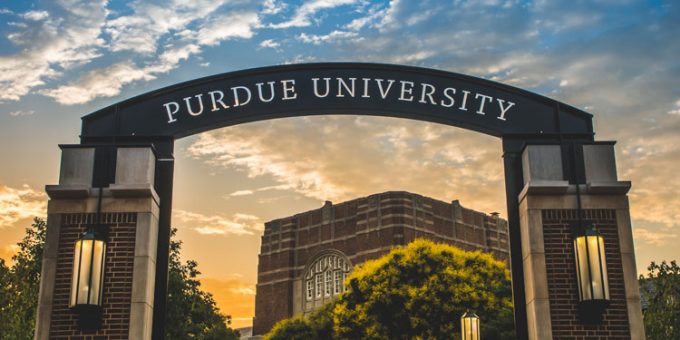 WEST LAFAYETTE – When new students arrive at Purdue each fall for the university’s weeklong Boiler Gold Rush orientation program, they learn about traditions, expectations, campus life, and ways to become involved. One topic, in particular, is intended to resonate with students well beyond graduation.

It’s the message of tolerance and free speech – the cornerstones of civil discourse. It’s a topic taken seriously at Purdue, which is widely known as a national leader in this area.

The latest recognition: a No. 3 ranking for campus free speech from the College Pulse/FIRE (Foundation for Individual Rights and Expression) survey. Purdue’s new ranking is three spots higher than last year and highlights the university’s ongoing emphasis on free speech concepts.

“Freedom of inquiry is at the core of the academic enterprise; knowledge advances only when ideas are free to collide and compete,” Purdue President Mitch Daniels said. “Free speech and tolerance are equally central to responsible citizenship and self-governance. That’s why we insist on these principles as fundamental in the Purdue experience.”

Purdue and the University of Chicago are the only Association of American Universities members in the top 10. Purdue is the highest-ranking member of the Big Ten (next is the University of Maryland at No. 20) and leads all Indiana-based schools (the University of Notre Dame is next at No. 31 on the overall listing).

Purdue placed an emphasis on free speech in 2015, when it became the first public university to adopt the Chicago Principles, a landmark declaration of the importance of freedom of expression in any university community. In 2016 Purdue reinforced its commitment by incorporating a dedicated module on freedom of expression during Boiler Gold Rush. This fall, more than 8,000 incoming students heard the message about Purdue’s Commitment to Freedom of Expression, which guarantees “all members of the university community the broadest possible latitude to speak, write, listen, challenge and learn.”

FIRE has featured the BGR sessions.

The College Pulse/FIRE rankings are based on surveys submitted by almost 45,000 students at more than 200 colleges. The survey, in particular, indicates strong administrative support at Purdue and a good speech climate.

“We challenge new students, as they join our ‘community of scholars,’ to speak and to listen with integrity and conviction and humility, and to extend that same opportunity to others who may think differently than they do,” said Patrick Kain, an associate professor of philosophy in the College of Liberal Arts. “When we honestly engage with one another, even on matters of great controversy, we can learn from one another and begin to learn together how to push the boundaries of knowledge and grapple with the grand challenges of the day. This isn’t always easy, and we can’t just assume everyone already knows what free inquiry is. We need to learn how this works.

“When we state our commitment to free inquiry, and when we defend the right of others to say things we find misguided or offensive, and we empower people to respond to that speech with evidence and arguments rather than violence or censorship, we advance the discussion and build a culture of free inquiry for all.”

Steven Schultz, the university’s general counsel, said, “As we tell our incoming students during Boiler Gold Rush, Purdue affirms and protects free speech not just because we’re obligated to as a public institution. We also do it as a matter of principle since it’s intrinsic to the mission of any university. We’re a free speech campus at Purdue – and proud of it.”

The FIRE report is the latest accolade for Purdue this year. U.S. News & World Report’s annual rankings showed Purdue ranked for the fifth consecutive year in the top 10 of the nation’s Most Innovative schools. Several Purdue programs are ranked. Purdue was also named a “Brand That Matters” by Fast Company magazine and earned a No. 4 ranking as the most trusted public university in the country by Morning Consult. Purdue ranks No. 1 in the state and No. 11 in the nation in Campus Pride’s 2022 list of Best Colleges for LGBTQ+ Students.