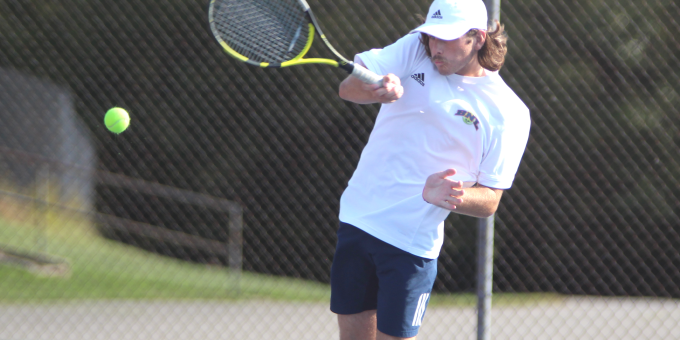 BEDFORD – With the snap of his fingers, Bedford North Lawrence senior Carter Kimmel showed just how fleeting four years can be. If only he had magic power in that Thanos flick, to either stop time or change the outcome of his team’s farewell celebration.

Kimmel and classmate Nate Pemberton did their part, posting a fast victory at No.2 doubles. But Salem tempered BNL’s Senior Day festivities with a 3-2 win – featuring a three-set battle and a tiebreaker triumph – on Thursday.

Pemberton and Kimmel rushed off the court like they had a deadline to meet, crushing Salem’s Hunter Trainor and Les Bowles 6-0, 6-1 at No.2 doubles. BNL’s other win came from freshman Orion Hill, who must have thought he was getting paid by the hour as he survived a marathon match with Nick Ingram at No.3 singles, recording a 6-4, 1-6, 7-6 (10-8 in the tiebreaker) victory as he fought through four match points during the tiebreaker.

One of these days, Hill will be one of the honorees. It will take three more years, but it’ll seem like yesterday.

“Honestly, it’s very weird,” Kimmel said. “I remember freshman year, with this happening. Now, like that (snapping his fingers), it’s here. I appreciate it, especially getting a win. It’s crazy how fast time flies.”

“It’s a great feeling,” Pemberton said. “I will admit it’s gone by like that. In the blink of an eye, it’s gone. I’ve enjoyed it.”

BNL would have enjoyed it more with a team triumph. Salem’s Cameron Albertson refused to validate the party reservations as he fought back from the brink for a 6-7 (5-7), 6-4, 6-1 win over Graham Turner (the third BNL senior) at No.1 singles. Albertson, a heavy hitter with powerful ground strokes, trailed 4-1 in the second set before shifting into overdrive and wearing down Graham by winning 11 of the last 12 games.

The loss didn’t diminish the impact of the upperclassmen.

“This is a special group of seniors,” BNL coach Chris Kurtz said. “They’ve worked hard at this game for a lot of years and really grown so much as players. But bigger than that, these three are great young men off the court. We are truly going to miss these guys.”

The Lions won their other points at No.2 singles, with Sawyer Davis cutting down Isaac Bridges 7-6 (9-7 in the tiebreaker), 6-0, and with Holden Collins combining with Japeth Webb for a 6-1, 7-5 win over Jayden Kemp and Drew Stephenson at No.1 doubles.

BNL (5-11) will compete in Hoosier Hills Conference tournament on Monday, visiting Jeffersonville for the first round.