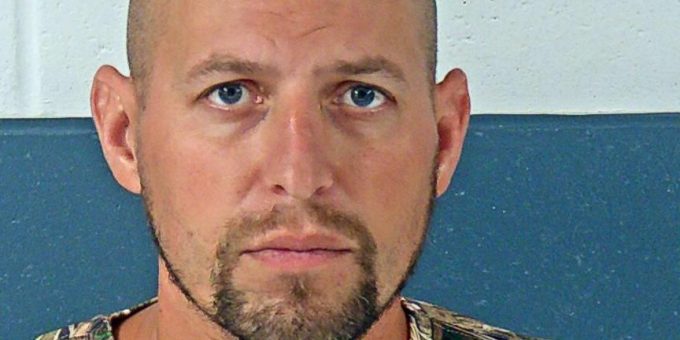 JUDAH – A Bloomington man was arrested on Sunday, September 11 after the Lawrence County Central Dispatch Center received a call reporting there was a male in the parking lot of Heaven Nevaeh Healing Center who was possibly under the influence of drugs.

The male was in a beat-up gray 2002 GMC Sierra pickup truck. The caller said the male was possibly armed with a gun.

Lawrence County Sheriff Department deputies responded to the scene. While en route officers learned the vehicle had been reported stolen from Bedford.

Officers located the vehicle at Johnny Junxions parked at a gas pump.

Officers found a female sitting in the front passenger seat and the male driver 39-year-old Sean Sarnecki, of Bloomington, was walking out of the store.

The officer asked Sarnecki if he had any weapons and he pulled a pocket knife out of his pocket and handed it to the officer.

He was then asked about the stolen truck and Sarnecki told the officer “someone let him borrow it” and he was on his way to return the vehicle.

He was then asked if there were any firearms in the truck and he said no.

In the bed of the truck, officers found two Amazon packages and the address of Heaven Neaveh Healing Center was on the packages.

Inside the truck, officers found five pieces of mail also with the address of Heaven Neaveh Healing Center of Valley Mission Lane on them.

Officers believed Sarnecki had stolen the packages and the mail from the Healing Center.

Sarenecki was detained and admitted to taking the truck after he found the keys had been left in the vehicle. He admitted that he didn’t know who owned the truck. He also admitted to stealing copper wire from a truck that was parked next to the stolen truck when he stole the vehicle.

He said his pastor at the Healing Center had given him permission to take the mail and packages.

Officers also found an Ipad in the truck. The Ipad belonged to the Healing Center.

The female passenger was picked up by Sarnecki because she needed a place to stay. Police say the woman was under the influence of some kind of drug. She told police she didn’t know anything about the truck or the stolen items.

The caller arrived at the scene and identified the pocket knife taken from Sarnecki as his. The knife was taken from an apartment behind the healing center. The packages and mail were inside the apartment due to the pastor being out of town and the neighbor had collected the mail while the pastor was out of town.

Sarnecki told police he had stolen the pocket knife, $20 from the apartment, and a cooler that was also found in the bed of the pickup. The cooler was stolen from a man who lives across the street from the Rosemount Motel. Sarnecki told police he used the money he stole to buy coffee and donuts for his passenger and the rest of the money he used to put gas in the truck. The gas was never pumped and the money $15.71 was returned by the store to the victim.

Police contacted the pastor of the healing center by phone and learned Sarnecki did not have permission to enter any of the buildings and had stolen the items, packages, and mail.

Other possible stolen items located in the truck were a Nintendo Switch and a sealed envelope that contained a check, a set of keys on a carabiner, medication stolen from a residence in Bloomington, two pairs of sunglasses, and a laptop computer and jewelry.

Sarnecki then told police the damage on the vehicle was from an accident. He allegedly struck a parked ambulance in Bloomington and fled the scene. The vehicle was so damaged it could not be driven.

Sarnecki was arrested on charges of burglary to a church, auto theft, and theft.