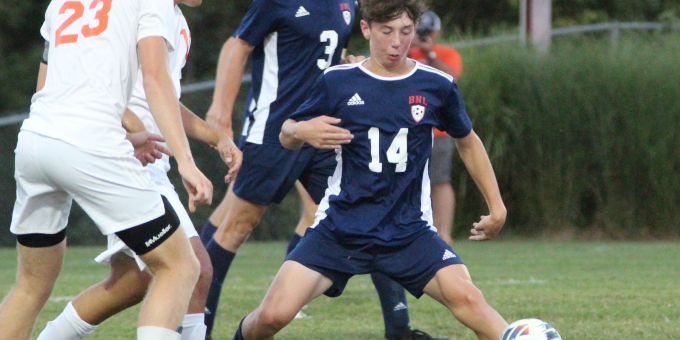 BEDFORD – If no one scores, did anything happen? Dutch soccer starJohan Cruyff, heralded as one of the greatest players and managers in the history of the sport, captured the quandary of that frustration: “If you can’t win, make sure you don’t lose.” Bedford North Lawrence and Columbus East took that to heart.

Two teams locked in offensive struggles battled to a 0-0 stalemate on Tuesday night. Oh, there was action, and drama, and plays to cheer about. But in the end, despite a lot of sweat equity, the scoreboard never moved.

Perhaps, when viewing recent trends, that ending is not surprising. The Stars (1-3-2) suffered their third straight shutout. The Olympians (1-3-4) have scored only three goals all season. But while the offenses had chances go begging, the defenses were challenged and stood their ground. Both keepers made amazing saves and got some help.

“The result is the result,” BNL coach Ryan Otis said. “I’m extremely happy with how we played. That’s what I want to see. The way we played was more like the early season when we played well.”

East (0-0-2 in the Hoosier Hills Conference) kept BNL bottled up in the first half, winning time of possession on its half of the field and keeping constant pressure on BNL goalie Brayden Miller. The Stars (0-1-1 in the league) took control of the final 15 minutes and were an offsides flag from breaking through.

The best scoring opportunities were noteworthy. East’s Giu Silva Coelho broke free to launch a rocket toward the low left corner of the goal, with Miller make a diving one-handed deflection midway through the first half. “That was a pivotal moment,” East coach Josh Gonsior said. “They built some energy off of that and had a lot of belief after that.”

East’s second near-miss came late in the second half, when BNL defender Joseph Brazzell made a sliding kick-away save in the goal mouth as Miller got caught away from the net with 8 minutes left.

BNL’s best shots came late. Adriano Sullivan slammed home a shot with 12:20 left but was called offsides, negating the goal. Gavin Green smashed a missile that was turned aside by East goalie Pete Coriden via a diving save with 7:15 remaining.

Thus, no goals. No winner. No loser, either. BNL will take that after losing three straight.

“The last couple of games, the defense has had some cracks,” Otis said. “So we shifted a little defensively, played more of a counter attack. We wanted to shore up that defense in the midfield. Now it will be about building back the possession.”

East’s offensive battles are understandable. The Olympians lost 12 seniors (including All-State scoring sensation Chris Quisenberry) and 8 starters from last season. And of their first six opponents this year, five were ranked.

“It’s definitely a challenge to replace those goals,” Gonsior said. “It’s that struggle. We have to break down what they put in front of us, and we haven’t figured that out. We’ve got the defensive side, now it’s hopefully firing on all cylinders by the end of the season.”