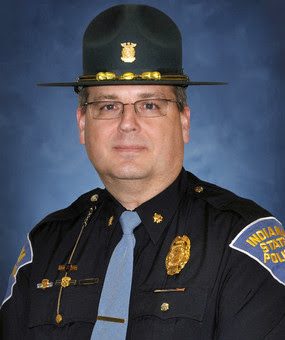 INDIANA – An Indiana State Police Major has announced his retirement from the Department following a career that has spanned nearly 36 years.

Major Steven D. Holland, who was originally from Paoli, Indiana, graduated from Paoli High School in 1982, and he was a graduate of Indiana University at Bloomington in 1986, where he earned his Bachelor of Science Degree. During his time at Indiana University, he served as a police officer for the Indiana University Police Department. On November 16, 1986, he graduated from the Indiana State Police Recruit Academy and was appointed as a Trooper and assigned to the now closed Indiana State Police Post in Seymour, patrolling in Jackson and Bartholomew Counties. Since joining the state police, Major Holland also graduated from the Southern Police Institute at the University of Louisville in 1996, as well as the FBI National Academy in Quantico, Virginia in 1997.

During his career, Major Holland has served on many boards, committees, and associations, including more recently:  the Indiana State Coroner’s Training Board; the Indiana Statewide Sexual Assault Response Team; the Board of Visitors for the Forensic and Investigative Sciences Program at Indiana University/Purdue University- Indianapolis; the American Society of Crime Laboratory Directors; the Midwest Crime Laboratory Directors Association; the FBI National Academy Associates; and the Association of State Criminal Investigative Agencies.  More locally, he has continued a long record of service as a board member for the Police Athletic and Activities League in Columbus, Indiana, and as a licensed Indiana High School Athletic Association basketball official.

Major Holland and his wife, Kimberly, have three adult children and are residents of Bartholomew County.