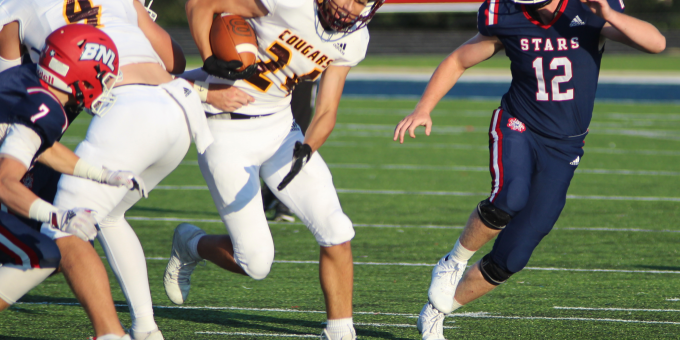 BEDFORD – Unbeknownst to Bedford North Lawrence, on a cloudless, flawless night, a Storm was brewin’. A little lightning, a lot of thunder, and a downpour of points caught the Stars in a flashflood.

Bloomington North, with one of its main offensive threats sidelined by injury, rained all over BNL on Friday night. Running back J.T. Storm, stepping into a glaring radar glitch with the injury to star Cody Mikulich, scored two touchdowns, quarterback Dash King added a dash of aerial fireworks, and North scored twice after turnovers as the Cougars continued their series dominance with a 35-14 victory.

BNL should have heard the rumblings, could have noticed the danger signs. North (1-1) came in wounded, with a loss and with Mikulich’s injury. And there was no reason to fear the Stars after winning 13 of the last 14 meetings. Now make that 14 of 15, and this one had the depressing tone of a step backward for BNL (0-2). The offense sputtered, the turnovers were dooming, and the steady stream of penalties left a yellow stain on the green carpet.

For the first few minutes, BNL was forcing the issue. Rhett Brinson’s fumble recovery set up a touchdown, Maddox Ray’s interception thwarted another, and momentum was working in BNL’s favor. But a bad punt snap shifted that, and from that point North was in control.

“There were too many plays of us shooting ourselves in the foot,” BNL coach Derrick Barker said. “Pre-snap penalties, the fumbles, a lot of little things that add up. Credit to them, every time we made a mistake, they capitalized. We were close to making the big plays, but we weren’t able to. And they did.”

North scored easily on its first series, as King connected with Jarno Hicks for 37 yards to set up Storm’s 4-yard dive and stretch for the TD. But following the Brinson recovery, after King was flushed from the pocket and lost possession, the Stars answered with Memphis Louden’s 16-yard strike to Kole Bailey, who made a diving catch on boundary for the score.

Ray’s interception stopped the next North drive, but that’s when disaster struck. Billy Cline, taking over the punting chores with Ryker Hughes sidelined by an illness, couldn’t contain a low, bouncing snap, and he was fortunate to dive on the loose ball at the 1-yard line. Storm stormed over on the next play for a 14-7 lead.

North took off. On the next series, Nolan Coy cracked loose for 28 yards, and King lofted an easy pitch-and-catch pass to tight end Aidan Steinfeldt for a 21-7 lead. King starred on the following drive, hitting Hicks for 34 yards before finding Cole Grupenhoff for 19 yards and a 28-7 advantage.

“There were a collection of plays,” Barker said. “We could have responded better. It’s tough to ask the defense to get a stop (at the 1), but that’s where we needed to play complementary football. We give one up, but we needed the offense to respond with a drive of their own. We need to be able to answer. We haven’t done that the last two weeks.”

In the second half, BNL’s first touch was a Zach Brosamle fumble that North cashed in, two plays covering 12 yards as Steinfeldt snagged a 5-yard touchdown pass in the left corner of the end zone for a 35-7 difference. That was North’s final fling, but it was enough. BNL didn’t break through again until Louden zipped a 17-yard touchdown to Dylan NIkirk with 7:25 left.

Storm finished with 82 rushing yards, more than adequate considering the shoes he filled. King was 16 of 22 passing for 203 yards and three TDs, with Hicks catching 7 for 116 yards.

“We knew Storm will be a good one,” North coach Scott Bless said. “We’re really blessed, we had that in our back pocket. We felt pretty good going in, we knew we were in good shape at that position. King really settled down and got the ball out quickly.”

BNL’s attack was missing a couple of pieces, and never got into a comfortable rhythm. Louden was 11 of 29 for 100 yards, and he was the top rusher with 54 yards. That takes into account the three North sacks and the quick jettisons to escape pressure. If there were stats for “hurries” and “pressures” North would have won that battle as well. The Stars were also guilty of 10 penalties.

“We really challenged, after last week (and the loss to Mooresville), both lines,” Bless said. “We have to win up front, and they took that upon themselves.”

So for the third straight season, BNL is winless after two weeks. There’s still a long way to go.

“We’re in familiar territory,” Barker said. “We weren’t expecting to be here. Our goals can still be accomplished, I still believe in the kids, I still think we have the capability of competing for the conference title. We have to identify the problems areas and get them fixed.”