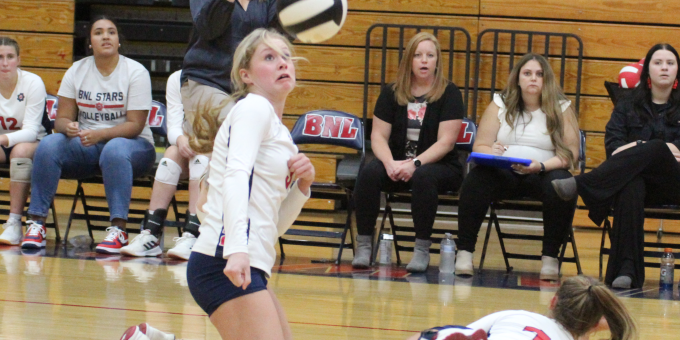 BEDFORD – From the word ‘go,’ Jennings County got in the flow, put on a hitting show, and kept a struggling foe low.

The Panthers, displaying power and formidable hitters up front, had streaks of untouchable scoring in all three sets while pushing past the Stars on Thursday night. Add in some communication breakdowns on the BNL side, and the finish result was a 25-12, 25-13, 25-12 Jennings victory.

For the first time this season, BNL (0-6, 0-1 in the Hoosier Hills Conference) looked a little lost, and Jennings (3-2, 2-1) pounced on that tentativeness and pounded on the weak points. The Stars could never flip the momentum.

“Our weak point is our mental game,” BNL coach Whitney Carroll said. “We see a girl that can hit the ball, and we shut down. We have powerful hitters, and they have yet to show themselves. They haven’t stepped up to the challenge. Somebody has to show up and hit the ball.”

The Panthers certainly had that. Freshman slugger Abrey Belding belted 8 kills, Charlee Barlow hammered 6 kills, and freshman Addison Martin totaled 5. Not only did JC hit it hard up front, they did that from the service line as well. Taylor Mowery had 6 aces (plus 15 digs) while Megan Vogel (11 digs) and Mallory Manowitz had 3 aces each.

“The girls tend to play tight,” JC coach Toby Harrell said. “They don’t want to relax and free-flow with the game. The big thing was we served well and flowed with the game.”

The flow for JC was all downstream. Lydia Roth served the final nine points of the first set, and Manowitz pounded out five straight points as Jennings closed the second by winning 7 of the last 8 points. When the Panthers opened the third with the first six points, the end was inevitable.

“I keep changing some things up, but this team has been through a lot,” Carroll said. “I’m not a coach that pulls kids out for errors, I believe in second chances. But we’re trying to find that sweet spot, the right combination of hitters that can produce, with the right passers in the back row that can produce. I thought we were going on a good ride, but when we shut down it sucks the life out of everybody.”

The Stars will host White River Valley on Monday.