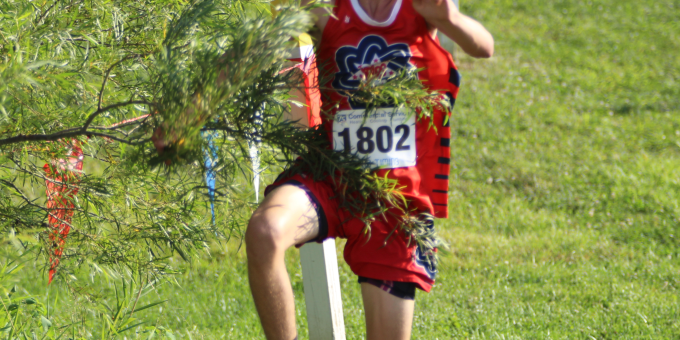 BEDFORD – Runners hate heat, especially with the energy-zapping humidity of a typical Indiana summer. That “feels like” gauge is totally inaccurate when churning through five kilometers. Feels like racing in a sauna. Feels like the clock stands still because legs just don’t want to work that hard.

Time wasn’t the enemy during Monday’s annual Scott Hiles Invitational on the draining BNL course. Survival was the goal, and Bedford North Lawrence did that better than most.

Paced by Francesca Orozco, the Stars finished second in the girls race, and Jonah Bailey stalked the frontrunners while leading BNL to third place in the boys event.

Orozco was fifth overall as BNL totaled 53 points. Eastern Greene, a future sectional hurdle for the Stars, won the girl race with 19. Bailey settled for seventh in the boys race as BNL scored 94 points and clipped Brownstown on the sixth-man tiebreaker. Bloomington North won that race with 17 points while Orleans was second with 69.

The most intriguing race was Bailey’s chase of the Bloomington North lead pack. The Cougars, perhaps a little crazy from the heat, sent out five to set a fast pace, although Bailey did his best to battle for the early lead. For the first half of the two laps around his home course, he was jockeying for position and shouldering his way to the front. He finally slipped back and crossed the line in 18:36.23.

“It was very tough,” Bailey said. “I was trying to stay up with the first pack, and they were boxing me in a little bit. I kind of fell back. That hill got me. I forgot how tough this course was.”

BNL’s other top finishers included Alex Nicholson (15th in 20:05.91) and Chase Turner (28th in 21:31.96). BNL won the tiebreaker with the Braves as Logan Langley edged his Brownstown counterpart by four places.

“You can’t complain about third place,” said Nick Boyd, who recently had the “interim” tag removed and is now the official BNL coach. “Jonah hung out with that lead pack a long time. He had a nice finish. I was pleased to see the group move forward.”

North’s Jacob Mitchell was the individual winner in 17:47.01. Orleans’ Bryce Jones broke up the North pack, grabbing fourth place in 18:04.30.

In the girls race, Orozco was easy to track with those colorful knee-high compression socks (worn to ease shin splints). She clocked in at 24:50.30, while freshman Jabrie Sullivan was eighth in 25:19.16. Another freshman (Madison Chandler) was 12th for the Stars in 27:12.31.

“It was pretty hot, but I definitely think I could have done better,” Orozco said.

“This is not a day we look at times,” BNL coach Jill Vance said. “We knew we would be slower than we have been, so I’m not surprised we were a lot slower. I was looking at placing.”

Linton’s Peyton Smith was the individual champion in 20:36.20, beating Eastern’s Lilyanna Blais by over 70 seconds.

BNL’s boys will compete in the Tiger Run in Louisville on Saturday. The girls will return to action at North Harrison on Sept. 1.