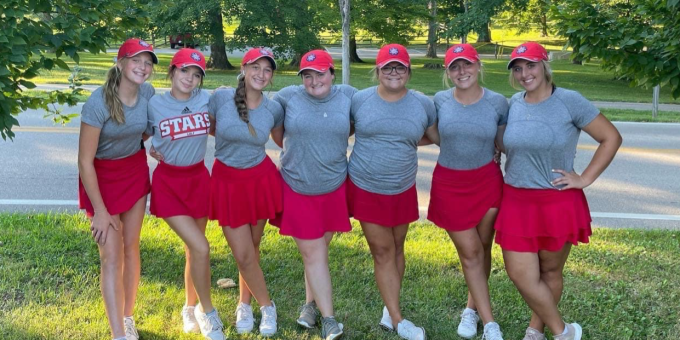 BLOOMINGTON – Bedford North Lawrence, which rose to No.18 in the latest state poll, topped Edgewood during girls high school golf action on the Pine Course at Cascades on Monday.

“Chloe and Ellie both played well today and ended up tying for medalist,” BNL coach Kori Johnston said. “Nora also scored much better today. We put in a lot of short game work last week and it’s definitely paying off. Their ability to recover from bad shots is improving, which is a game changer in high school golf.

“Kinleigh Root had a case of the shanks today but did her best to push through it as much as she could. Kenley Craig is working through a little bit of a swing change right now and has lost a little confidence in her swing. So we will do some range work to get them both back down where they should be.”

Craig capped the BNL scoring with a 47.

The Stars will host Martinsville on Thursday.