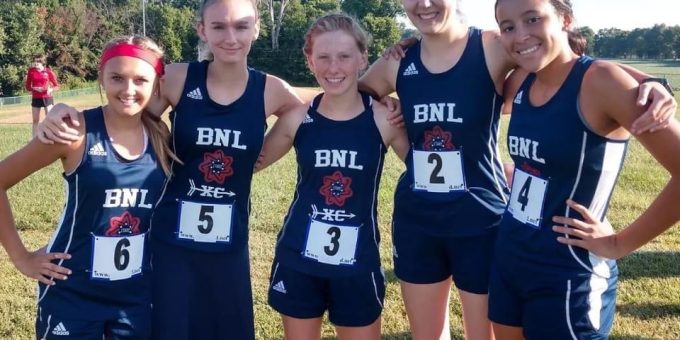 “Today was a nice race overall for everyone,” BNL interim coach Nick Boyd said. “We got to experience the regional course in a race atmosphere, and that will be invaluable in the future. This was the first race for a lot of our runners and they gained some great experience. We had a nice pack to round out the top five. Hopefully we will be able to move the pack forward and have a few other runners in that group. It’s always helpful to have teammates supporting and pushing each other throughout the race.”

Edgewood’s Caleb Webb was the individual champion in 17:08.7.

“Excellent sophomore start for Franny,” BNL coach Jill Vance said. “She basically starts this season with the time she ended on last season, and I think this is the first time that all three of her mile splits have been under 8 minutes.

”Jabrie is the definition of how consistent summer conditioning can pay off. Awesome freshman debut time. She’s not that far behind Franny and it would be great to see both of them under 23 by midseason. That would be a strong scoring combo for us.”

BNL will compete at Seymour on Thursday.