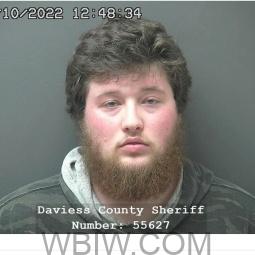 WASHINGTON – A Washington man was arrested Tuesday on a charge of child solicitation after police say he propositioned a minor.

On August 9th, officers of the Washington Police Department received a complaint regarding 20-year-old Austin McCoy, of Washington, for being in contact with a minor.

Officers investigated the scene, and McCoy was arrested on charges of child solicitation of a child under the age of 14. McCoy is being held on $50,000 bond in the Daviess County Security Center.

The investigation is ongoing by officers and detectives of the Washington Police Department.