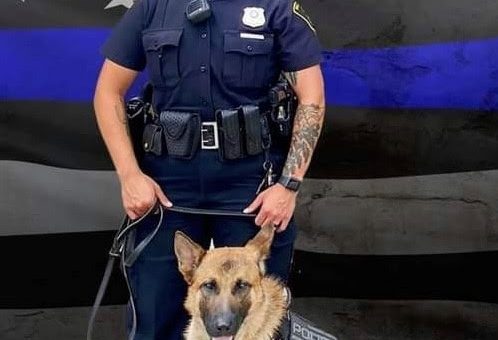 RICHMOND – At the request of Chief Michael Britt of the Richmond Police Department, the Indiana State Police are investigating an officer-involved shooting that left a Richmond Police Officer in very critical condition.

Wednesday at approximately 6:30 p.m. Richmond Police K-9 Officer Seara Burton responded to a call from other officers to assist with a traffic stop in the area of  North 12th Street and C Street.

Officer Burton located the vehicle, which was a moped being ridden by an adult male, and made a traffic stop at that location. During the traffic stop, Officer Burton’s K9 partner Brev was used to conduct an open-air sniff around the moped and indicated the possible presence of narcotics.

The suspect was identified as 47-year-old, Philip M. Lee of Richmond.

While officers were speaking with Lee he allegedly pulled out a firearm and shot several rounds toward officers. Officer Burton was struck by the gunfire. Other officers on the scene returned fire and Lee fled on foot.

After a brief foot chase, Lee was apprehended.  He was treated for gunshot wounds by the officers and later transported by ambulance to Reid Hospital in Richmond.

Officer Burton, 28, was transported by ambulance to a local hospital and later airlifted to a hospital in Dayton Ohio where she was listed in critical condition. She has served with Richmond Police Department for four years.

This investigation is active and ongoing. Detectives expect to be on the scene for several more hours.

All information released is preliminary and subject to change as evidence dictates.

The suspect in custody has been arrested on probable cause, the Wayne County Prosecutor will determine actual criminal charges upon review of the case.