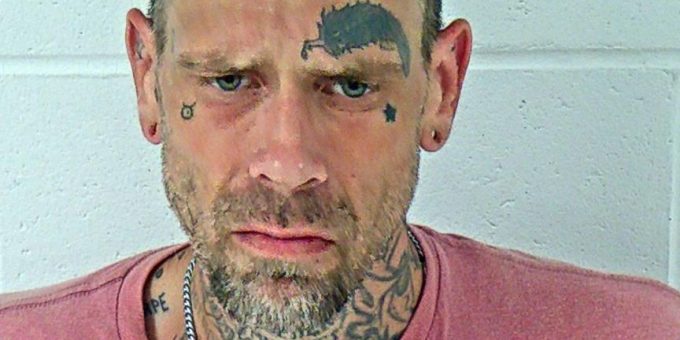 BEDFORD – A Bedford man was arrested on Monday, August 8th when Bedford Police were called to an apartment on Ludlow Drive after a report of a physical altercation.

An officer knocked on the door with no response. He then heard a loud noise coming from inside and entered the apartment. He located 38-year-old Justin Hobson and a female walking down the stairs.

The officer noticed there were three other people in the apartment, two adults and a 17-year-old male.

Officers spoke to everyone and learned there was nothing physical that happened and no charges were filed. However, a female did request that another female and Hobson be removed from the apartment

Hobson and the female gathered their belongings before leaving.

After leaving the property, the officers left the scene.

As one of the officers was leaving, he was flagged down by the resident of the apartment who reported a teal-colored iPhone was missing from her bedroom. She believed Hobson stole the phone while he was upstairs gathering his belongings.

The officer located Hobson standing at a nearby bus stop and saw the phone in Hobson’s back pocket. Hobson stated he was using the phone to “back up” his other cell phone. He stated it was an accident that it was in his possession and did not intend to steal it.

Hobson also had a second pink and white iPhone in his possession.

The phone was returned to the female who told police there was no reason for Hobson to have her phone. She then reported a second iPhone which was pink and white stolen.

Other officers were alerted and confiscated that iPhone from Hobson. During a search of his pockets police also found a diamond ring.

The female then went to search her jewelry box and found a diamond ring missing that had belonged to her deceased mother. She described the ring and it matched the one found in Hobson’s pocket.

Hobson is facing charges of theft with a prior conviction and theft greater than $750.