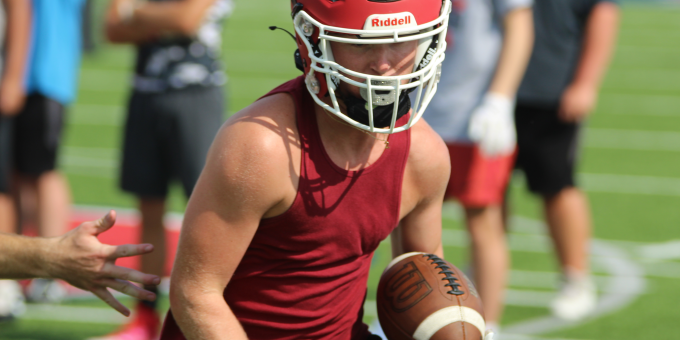 BEDFORD – Star Trek fans, or fanatics since the expended term fits those immersed in that science fiction world, developed a new language for the alien race that torments Captain Kirk and the Federation heroes. There’s now a dictionary for Klingon words, and a handful of zealous extremists can even converse in the fabricated dialect.

Kling will unveil the 2022 Bluejackets on Friday night when Mitchell clashes with county rival Bedford North Lawrence in the IHSAA controlled scrimmage at BNL. It’s the final workout session prior to the season openers, thus important for momentum and confidence. That speaks volumes.

For Kling, returning to don the main headset after 12 years (he went 20-11 from 2008-10 at Triton Central), the scrimmage will be a second phase in the process. The first was summer workouts, which set a solid tone. Now the Bluejackets, coming off a 3-6 season, are looking to build on that foundation.

“I want to see the evolution of that, see what another month has done for us, see how much the off-season program has paid off,” said Kling, taking over after a stint as an assistant at Princeton. “I want to see us give everything we have, leave it on the field, and see where we’re at.

“We are very much a disciplined, and we’re going to be a physical, football team. We’re still in the learning process, it will just take time. I follow the (Alabama coach) Nick Saban idea of the process, what it will take to get there. We’re going to work hard and be hard-nosed.”

BNL went through that introductory phase with a new coach last year. Derrick Barker, after going 4-6 in 2021, is now focused on execution, on defensive improvements, on offensive sharpness with his veteran skill players. That’s the luxury of experience.

“I’m excited, fired up to see what our defense looks like,” Barker said. “I want to see both sides execute, cut down on the mental mistakes. We’ve talked about perfect attitude and perfect effort, now we want to start throwing in perfect execution.”

For the Stars, the offense will take center stage with junior quarterback Memphis Louden (1,346 passing yards and 13 touchdowns last season), receivers Dylan Nikirk (24 catches, 479 yards), Ryker Hughes (23 receptions, 453 yards) and Kole Bailey, plus newcomer running back Zach Brosamle and four returners on the line up front. Their expectations for success are high. That means Barker and his staff can spend more focus energy on the defense, which took more of a graduation hit. The scrimmage will be a vital tool to determine starters on the defensive line and secondary.

“We bring back four offensive linemen that have played a lot, we bring back a quarterback and receivers that have a lot of game reps, so I expect them to be more crisp,” Barker said. “The defensive line is still up in the air. We have a lot of guys that are competing for playing time, but there’s not any three that stand head and shoulders above the rest. I’d like to get a core group that we know can be the ones to play the majority of the time.”

Barker is also stressing offensive tempo. If necessary, he wants the Stars capable of running plays in 15-20 second intervals. So the three varsity sessions of 15, 10 (from the goal line) and 12 scripted plays could go very quickly.

“We want to play quick,” Barker said. “It’s a tool we’d like to have. There are certain situations where we want that ability. It puts stress on the defense to just line up, communicate and know the job. It can keep the defense from running blitzes.

“It’s always important to play well. Any time you’re playing against an opponent, you want to play your best. It’s not who’s lined up across from us, we want to do our job the best we can, execute at the highest level, so we can feel good about where we are, see what we’re trying to look like, solidify that we’re on the right path.”

The Bluejackets will feature size up front, none bigger than senior lineman Ayden Tolliver (6-5, 320 pounds) and Alex Kling (the coach’s son at 6-2, 270). Both are college recruiting targets. Other players to watch will include quarterback Cale England, wingback Ethan Turner and explosive playmaker A.J. Sarver. The scrimmage will be a proving ground for the battle at running back, with Carsyn Herald and Blake Williams competing for carries.

The scrimmage was originally scheduled for Mitchell, but delays in getting the new turf field finished forced the move to BNL. The Bluejackets have also moved their season opener to Edgewood, which means the projected home debut on the new field will now be on Sept. 16. That’s five straight weeks of travel.

“Adversity is what life is built on,” Kling said. “It’s how we respond and deal with it, that will say a lot about our character. We’re still going to play football. The scrimmage will be a great challenge for us, to find a way to execute. I want to see execution and effort.”

Action will begin at 7 p.m. BNL will open the season at home against Martinsville on Aug. 19.