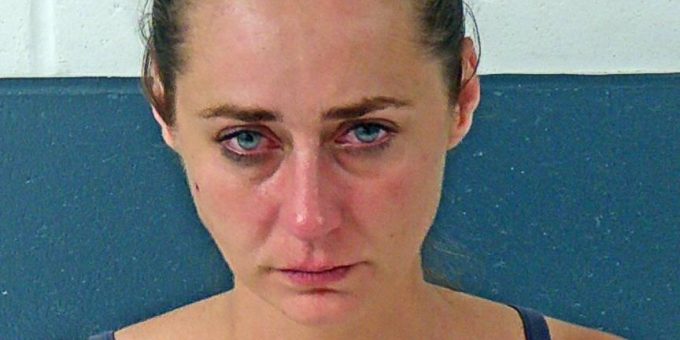 BEDFORD – A Mitchell woman was arrested on Friday night after a report at 11 p.m. of a possibly intoxicated female driver with four children in her vehicle at Revere’s Food & Fuel on16th Street.

Officers checked the parking lot and could not find the woman or the vehicle.

The children told police that Terrell had parked behind the warehouse “across the field”.

Another officer stayed with the children, while a second officer attempted to locate Terrell.

That officer located Terrell in her 2004 black Chevrolet Avalanche behind the building south of 1608 Williams Road.

The officer said Terrell smelled of alcohol, and her eyes were glassy and bloodshot.

When asked why she parked where she did, she replied the children made her because she had run off the road while driving south on State Road 37 from Bloomington because she was drunk.

Terrell failed several field sobriety tests and blew a 0.265 on a portable breath test. The legal limit in Indiana is 0.08 percent.

Terrell refused to submit to a blood draw so a search warrant was requested and obtained from Superior Court II Judge Bob Cline.

When police arrived at IU Health Bedford Hospital for the blood draw, Terrell refused to walk on her own and had to be escorted into the hospital. Police say Terrell continued to jerk her arm from officers and pull away saying “get away from me”.

Terrell was argumentative, confrontational, non-complaint and initially refused to allow the IU Health Phlebotomist to execute the search warrant. However, a blood draw was finally executed.

After leaving the hospital and arriving at the Bedford Police Department for processing Terrell again refused to walk on her own and had to be escorted into the booking area.

She was then transported to the Lawrence County Jail on charges of operating a vehicle while intoxicated with passengers under the age of 18, OWI endangerment, four counts of neglect of a dependant, and resisting arrest by force.

Once at the jail, Terrell refused to walk and fell on the floor. Officers had to drag Terrell to the booking counter for processing.

Terrell was given a second portable breath test and those results surpassed Indiana’s legal limit of 0.08 with a 0.233 percent blood alcohol content.

The four children all under the age of 18 were picked up by a family member. The children’s father was also contacted and notified of the situation along with the Department of Child Services. Terrell’s vehicle was towed by Mikel’s Wrecker Service.