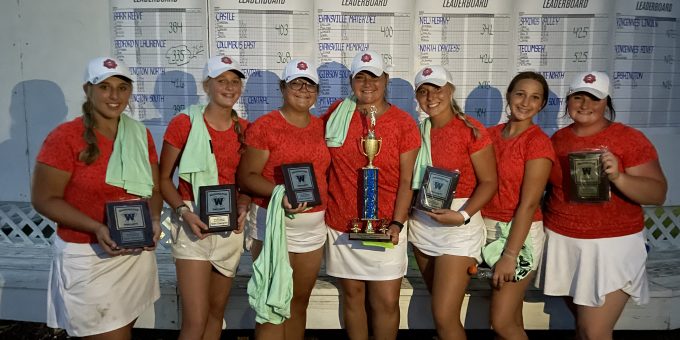 The Stars survived a six-hour round in the heat and humidity to post a team score of 335 (on the course that will host the IHSAA regional) and claim the crown by six shots over Hoosier Hills Conference rival New Albany. Corydon was third in the 20-team field with 358.

Chloe McFaddin paced the Stars with 78 while Kenley Craig carded an 80.

“Chloe continues to perform for us,” BNL coach Kori Johnston said. “She’s a strong player and is reaping the benefits of the work she put in this summer. Kenley played much more like herself today. She hit the ball well and was confident in her shots. We’ve got a little work to do on putting but overall a great round.“

“So proud of the girls today,” Johnston said. “It was a long six-hour round in the heat and a little rain, but they stayed focused and got it done. I’m excited to see them post good numbers at our regional course. It gives us good vibes looking ahead to the postseason.”

The Stars will return to action on Tuesday, facing Corydon and Springs Valley in French Lick.