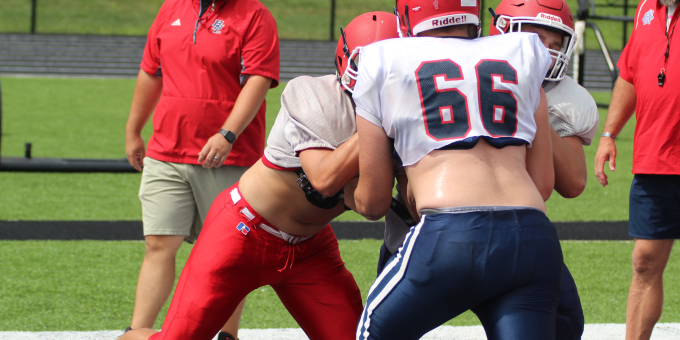 BEDFORD – Garrett Hayes, with all the grace and speed expected from an offensive lineman, rumbled through the pass pattern. At the end of a long first week of practice, given the chance for some one-on-one competition in front of the entire program and a live studio audience, Hayes not only got open, he caught the ball.

His teammates roared, partially in approval and partially to rub a little salt in the wound of the embarrassed defender (who shall remain nameless, to protect identity). Doubtful that will be added to the Bedford North Lawrence offensive playbook. Hayes is a Mafia man, in the protection racket, the projected starting center. His hands are for snapping, not snatching.

Yet, on the first day for the Stars to don full gear, those last few minutes of the public practice session encapsulated the mood of the day. Compete, enjoy the light-hearted moment. It’s going to get serious from this point.

BNL concluded the first five days with a workout that included the middle school teams on the turf and fans in the stands. What they saw was the usual practice regimen – drills, some scrimmaging, some correcting of mistakes and flashes of exceptionalism.

“We might not have gotten as much done as a full two-hour practice where we were fully committed to drills, but the energy was good and in the long run we got more out of it,” BNL coach Derrick Barker said. “It’s been a long week, going every day and with school starting, so it was important to have fun.

“That was the goal for today, to come out and have some fun, compete against each other. We’re a competitive bunch, and that’s good to see.”

The goal every day is improvement, and sometimes that’s difficult to pinpoint. It’s like standing a 7th-grader, some of whom were barely strong enough to run with shoulder pads on without wobbling or falling when attempting to catch a pass, up side-by-side against a varsity member. Isn’t it amazing what four years can do in terms of maturity? The same can be said for one year under a new coach. This is Barker’s second season, and there’s measurable differences.

“Our familiarity, with the offensive playbook especially, has gotten a lot better,” Barker said. “We didn’t change a whole lot. Our communication is a lot better, and that comes from a lot of returning players that have played together. You have to communicate a lot, pre-snap and during the play.

“The biggest thing is the tempo of practice. That’s something I really pushed. We’re flying around, running everywhere. We get a lot more done.”

“They are still very subject to change,” Barker said. “We might have a first unit, where 11 guys start, but we’ll have more guys that can go in and play. At the end of the day, we’ll play our best 11 on the field.”

Next week will be geared toward fine-tuning. Eliminate mistakes, sharpen the execution, hone the mind.

“I expect perfect effort, perfect aggression,” Barker said. “I want to see no mental mistakes, don’t put the ball on the ground. We have to focus on Stars not beating the Stars.”

“We want to do our best and outwork them,” Hayes said. “That’s what we’re going to do.”

BNL will host Mitchell on Aug. 12 (that scrimmage was originally scheduled for Mitchell, but the new turf home for the Bluejackets will not be ready for that unveiling). The Stars will open the 2022 campaign at home against Martinsville on Aug. 19.