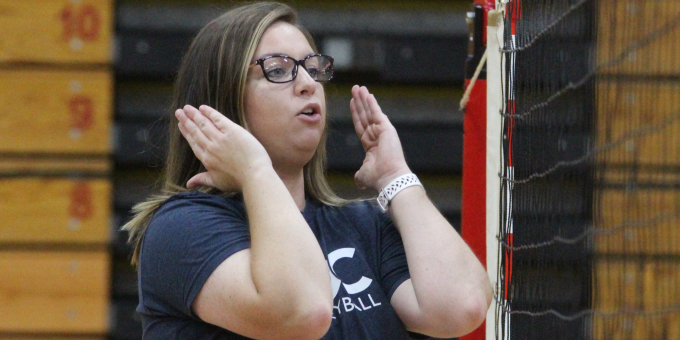 BEDFORD – When Whitney Carroll was hired as Bedford North Lawrence’s third volleyball coach in the last four years, taking over her alma mater, she found the program at its worst. Hard to fly when wings and spirit are broken, coming off a joyless campaign of struggles and setbacks.

She could hear it in the whispers on the street, in the voices of her athletes, read the misery in their eyes. Losing is not fun, not at all. BNL, with only one winning season in the last five, had gone 3-17 in 2021, and there was only one direction to steer. Get off the ground and move forward.

Starting from scratch, in five short months, Carroll has implemented wholesale changes – in the coaching staff, in the culture, in the attitude. She didn’t let a day go by without progress. The Stars have dusted off the past, cleaned the slate, as they begin official preparation for the 2022 season.

With a five-player senior class that has gone through so many adjustments, with a roster (pared down following Wednesday’s cuts on the final day of tryouts) starving for something good to chew on, BNL will chase success. And that’s been elusive after going 47-81 over the last five years. For the 30-year-old Carroll, a 2010 BNL grad, it’s critical.

“That’s the goal,” Carroll said when stating that a winning record is within reach. “I know these girls can do great things. I’m excited to see it. They’re coming ready to play and they’re confident now.”

That’s where the rebuilding started. Carroll had to restore faith. And that’s not easy. Sometimes tough love is the answer, but Carroll sensed her team needed a group hug.

“Our approach was to walk in here and tell them every day we love them and respect them, as people,” she said. “We made sure we connected with them. We’re in the business of building good people, good volleyball players will come after that. They’ve learned to trust us. They’ve seen the respect, now we’re getting the respect back and making some good headway.”

For the senior class, which includes setter Annie Waggoner, hitter Hayley Davis, Harley Tanksley, Graycen Todd and oft-injured Emma Crane (who qualifies for frequent-flyer miles with her knee surgeon), this turnaround effort is vital, not only for their farewell tour, but for the future of the program.

“We have to continue to work, to listen,” Tanksley said. “It’s a big part of our job to get the underclassmen equipped and ready, stay positive and have the attitude that everything will be fine. It’s not been that hard because of how open Coach has been, how understanding. She knows we’ve been through it, and last year was a little rough. She’s been honest with us about it. So it’s been as easy as it can be.”

On the court, BNL will have holes to fill. The Stars lost six seniors from a year ago, including All-Hoosier Hills Conference standout Carlee Kern from the front-row attack spot. Potential starters include junior Camryn Anderson as a left-side hitter, junior outside hitter Isabelle Harding, and back-row ace Kendlyn Alvey.

“We’ve shown major progress,” Carroll said. “The fundamentals were nil, so we started from scratch, from the ground up with the basics. We started with no stone unturned. We have some tall girls, some girls that can really move. It’s clicking.“

Winning will be a by-product of all the positive changes.

“It take a lot of grit, a lot of hard work and determination,” Davis said. “It’s the love of the game that will get you far. The seniors will have to use what we’ve learned, really put it together for our team. We all know how to play the game.

“It’s been a real struggle mentally. It’s very hard to get used to (the coaching changes), very hard to adjust. Every coach has different expectations for the team, different procedures and standards. Whitney has an overall plan. She really cares for the girls, she would go out of her way to do anything for us. She makes us feel so loved, and it’s more of a family. It’s more than volleyball.”

BNL will open the season on Aug. 16, hosting county rival Mitchell as Carroll squares off with Scott Saunders, her former coach and mentor.