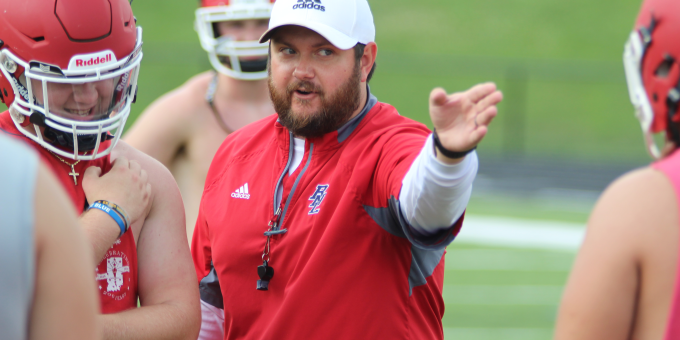 BEDFORD – Summer flies past, like a speeding car on the raceway (or a local road where the speed limit is taken as a suggestion) with the same Doppler Effect. As it approaches, it’s loud and full of possibilities. As it passes, it’s much quieter as it disappears, beckoning a follower.

Bedford North Lawrence’s football summer whizzed by with the same speed. What began with so much noise and energy is now a fading memory, and the real work of preparing for the 2022 regular season is under way at full throttle. For anyone wishing they had caught a ride on the momentum train, rather than wave as it zoomed away, it’s too late.

The Stars shifted into high gear on Monday afternoon, making their official practice debut on the turf. All the lifting sessions with the new weight equipment, all the off-season workouts, all the camps and scrimmages, all the sweat equity they invested, will be cashed in for rewards. And there’s no cheating. They’ll get what they earned.

Derrick Barker’s second season as head coach is now roaring into view, and there’s plenty of possibilities with a 20-plus senior class that’s the first to go through the combined middle school program and work its way to varsity leadership, with returning veterans at key positions. Coming off a 4-6 season, BNL has some ground to cover.

Off they go, into the wild wonder. Summer days, drifting away. Summer fling, don’t mean a thing. It’s the fall that counts, but it reflects the prep work.

“It was a really good summer, the effort and attitude,” Barker said. “The biggest thing is the weight room, keep hammering the weights. We worked on fundamental techniques, got some offense and defense installed. And this was a good first day. There are always logistics issues, making sure we have all the papers signed. The summer flies by. Next thing you know, it’s here.”

There’s always first-day issues, although for some (physicals and other requirements) there was no excuse except summer laziness. Barker will run that out of them. He wants practices at a fast pace, with little down time, and his new-look staff will be busy getting everything in place in a short time window. The Stars should know what to expect, including the shift to Class 4A for the postseason.

“With my second year, it’s being a little comfortable with the non-football things,” Barker said. “There’s a lot of stuff outside of coaching on the field. And now the kids know what to expect. Last year there was some unexpected things. They understand what we’re trying to get done, some more familiarity.”

The senior class will play huge roles. They have remained bonded together. As senior linebacker Reid Parker indicted, playing together for multiple years has been a blessing. “It definitely helped us, helped us stay together,” he said. “We’ve played together longer, and that will help us succeed in the long run.”

“The last few years we’ve been relying on one or two freshmen in a pretty important spot,” Barker said. “We have a big senior class. They’ve played together, they’re tight-knit. We want numbers to be up (and there’s approximately 80 total in the program), but we want the kids who are here for the right reasons. I’d rather play with 60 kids who want to be here and play football.”

The first week of practice will include the introduction of full-pad contact (although BNL will delay that until Friday’s public workout session at 4 p.m., with the curious allowed to get a free and first glimpse at the progress). Next will come the annual IHSAA-sanctioned scrimmage with Mitchell on Aug. 12, and then the season opener with Martinsville on Aug. 19. It’ll get here in a hurry, and there’s still plenty of competition to settle the depth chart.

“This time of year, every position is open,” Barker said. “We might have someone coming back who started last year, but we’ll do what’s best for the team. Championship teams are not a collection of talent, it’s a team. We have a lot of talented kids who can make plays, but it will come down to the 11 we can put on the field that can get together and play for each other.”