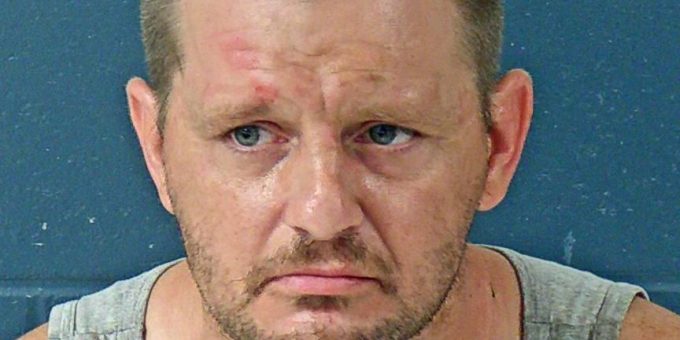 BEDFORD – A Bedford man was arrested early Saturday morning after a Bedford Police officer spotted a vehicle parked in a stall at the Eastside Carwash on 16th Street at 3:42 a.m. The officer noticed the windows of the vehicle were rolled down and a male sitting in the driver’s seat with his head down.

The officer approached the vehicle and found 44-year-old Travis Collins.

Collins told the officer he had just finished vacuuming his vehicle and was working on his radio and was getting ready to leave.

The officer asked Collins for his driver’s license and Collins turned his body from the officer and began digging through the center console.

The officer noted in his report that Collins was nervous, sweating and his hands were shaking.

Collins was asked if he had any illegal drugs in his vehicle. He replied he did not.

The officer grabbed Collin’s hand and told him to stop reaching into his pocket. Collins continued attempting to reach into his pants and resist the officer.

The officer was able to restrain Collins’ arms, place them behind his back and placed Collins against a wall at the carwash.

Collins continued to reach towards his shorts. At this time, another officer arrived and assisted in placing Collins in handcuffs.

The officer then began searching Collins who was standing with his legs together. Collins again began resisting. In Collins’ pants officers found a blue plastic container from between Travis’s buttocks. In the container was a plastic baggie containing crystal meth and three Buprenorphine/Naloxone pills.