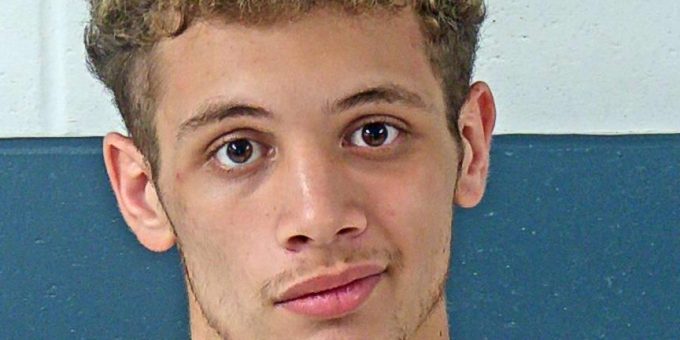 BEDFORD – A Spencer man was arrested Saturday night after Bedford Police officers were dispatched to the Bedford Federal Bank located at 2955 John Williams Boulevard in reference to a male attempting to break into the overnight money drop box at the bank.

When officers arrived they found a black car stopped at the entrance of the parking lot and a male identified as 19-year-old Elijah Del Fierro walking west on John Williams Boulevard not far from the bank parking lot.

The driver and passenger in the black vehicle told police they were making a nightly deposit and witnessed a man (Del Fierro) attempting to break into the night deposit box.

They told police the man then attempted to open their vehicle door and get inside the vehicle.

Del Fierro then took off running heading towards the Walmart parking lot.

Del Fierro then began yelling and screaming causing the employees from the restaurant to exit the building to see what was going on.

Other officers then arrived on the scene. One began to search Del Fierro and he then began kicking his legs and yelling. Del Fierro was medically cleared at the scene and then transported to jail on charges of resisting arrest, disorderly conduct, attempted theft, intimidation, and unauthorized entry to a motor vehicle in the commission of a crime.