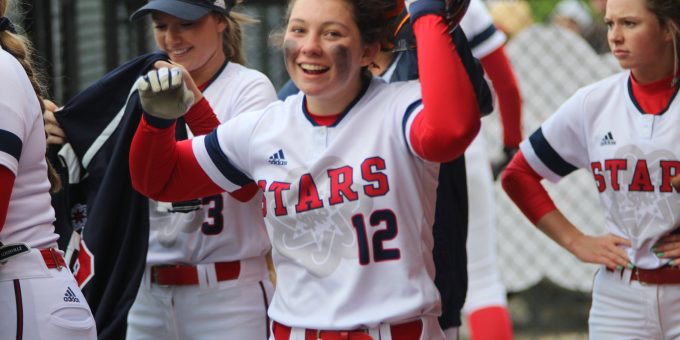 BEDFORD – If Ava Ratliff could chose a superpower, she would probably select invisibility. She would prefer to work in anonymity, just one of the girls, another player in the crowded dugout. Attention causes her face to flush a couple of red shades as that awkward teen age shows up in a nervous laugh.

Ratliff is way past inconspicuous ambiguity. She’s been unmasked, unable to hide behind a disguise. When she holds a softball bat in her hands, she does possess a super power. She’s a superstar. Better get used to the spotlight.

Following the most explosive freshman season in state history, when she led the state in home runs and powered Bedford North Lawerence to a regional championship, Ratliff has continued to collect major individual awards. She added to the impressive list of honors on Friday with the most prestigious to date.

Ratliff was named the national high school Catcher of the Year by the National Fastpitch Coaches Association. She’s already been named MaxPrep’s Freshman of the Year and a First Team All-American by the NFCA. But there’s no qualifier on this. Best in the nation at her position. Let that sink in for a moment.

“The recognition she has, it’s unbelievable,” said BNL coach Brad Gilbert, who revealed the honor after a team batting practice session on Thursday evening. “It’s awesome. I’m at a loss for words. It’s so exciting for her, it’s a big deal.”

Here at the monster numbers that Ratliff compiled in 2022 to earn the accolades. She hit a robust .538 and set program records for homers (21), hits (50) and RBIs (53) as the Stars went 28-3 and advanced to the Class 4A semistate. At the conclusion of the season, she was being intentionally walked repeatedly, the ultimate sign of respect from the opposing dugout.

“I’ve put in a lot of hard work, but none of it has been for awards,” Ratliff said. “Softball is not just a one-person thing. It’s my teammates, my coaches. This is a big honor, a big surprise. I had no idea any of this was happening. It just feels amazing. I think they’re all big and exciting.”

Watching Ratliff work in the batter’s box is captivating. Gilbert jokes he should charge admission for batting practice, because it draws a crowd of parents, people from other sports, those within earshot who can hear the thunder when she connects. That noise is unmistakable. During one hitting session last week, her teammates counted 53 bombs (on approximately 75-80 swings), followed by another 50-blast session two nights later. And they’re usually not high, drifting fly balls with a hint of laziness, they are laser-beam line drives, bullets that pierce. If a softball could scream in pain . . .

“She’s just so dialed in, her swing is so smooth,” Gilbert said. “I have the luxury of being at third base (during a game), and I can usually tell as soon as there’s contact. She’s so smooth, sometimes you’re not sure that it will get high enough. Nothing surprises me.”

The honor doesn’t read “slugger of year.” It states ”catcher” and her skill behind the plate gets overshadowed. Ratliff owns a strong arm (throwing from her knees as softball catchers must), she blocks low pitches with athletic grace, she will dive toward the backstop to snag foul balls, and she has already established trust with the BNL pitching staff.

“She has a very strong arm, she’s really accurate,” Gilbert said. “I look for us to throw more behind runners next year. Maybe last year, as a freshman, she was a little bit timid to do that. We’re going to give her the green light. She has a cannon for an arm, she blocks the ball well, she’s not afraid to dive after foul balls. She does all the things a strong catcher should do.

”She has a great relationship with our pitching staff, and that’s important. Sarah Stone (BNL’s former star who’s now at Indiana University) was a great catcher who worked with the umpires, told us things that were working when she came to the dugout, she was a great teammate, all those intangible things. Ava just took up where Sarah left off.”

NCAA rules have changed where Ratliff must wait until next summer to start receiving college scholarship offers. Those will flood from all directions and could be overwhelming for a kid who just wants to play the game she loves. While she will have to adjust to the limelight, it won’t change her perspective. She’s hitting it out of the park with her humble attitude.

“I enjoy it, and my teammates make it fun. I still love it,” Ratliff said. “I’m going to stay humble. I’m not going to let it get in my head. I don’t want to get cocky and get a big head, just relax and play my game. Getting cocky makes you play worse. You want a little confidence, but not too much.”