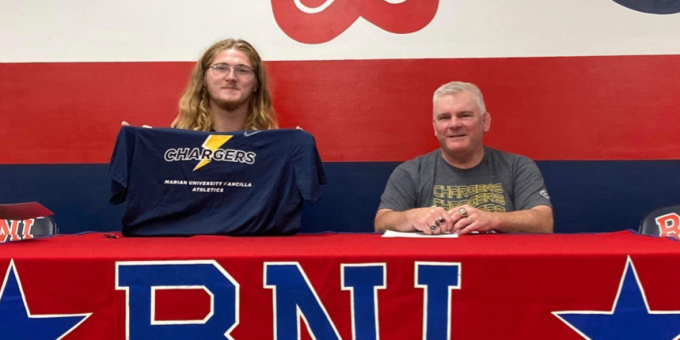 Connaughton, a three-time regional qualifier for the Stars, signed with Marian University’s Ancilla College on Thursday. He will join former teammate Reese Hamblen, who was instrumental in getting Connaughton his shot with the Chargers, on the Ancilla roster.

When Hamblen decided to attend Ancilla, he asked coach Mark Line if the roster was full. Line, a former high school coach with six Hoosier programs, indicated he needed someone at 197 pounds. Hamblen just happened to know a guy.

“It was fate, destiny, whatever you want to call it,” Connaughton said. “A vision quest. It was cool. It will be a cool experience. I always thought I wouldn’t have enough time for sports in college. But when I heard that perfect moment, it was my time to step up to the plate and show what I can do at the next level.”

Connaughton advanced to the regional as a sophomore (with a 19-8 record), junior (14-10) and senior (15-6 after recovering from a left knee injury). He will join a program (located in Plymouth) that competes in the NJCAA.

“It will be an interesting change,” said Connaughton, who plans to major in telecommunications. “It’s a whole new tier. This is my one-in-a-million chance, to do what I do and make memories against the competition I will face. With wrestling, it’s about the camaraderie. You build a brotherhood with your team. It’s really cool, to learn their life and build a friendship.”