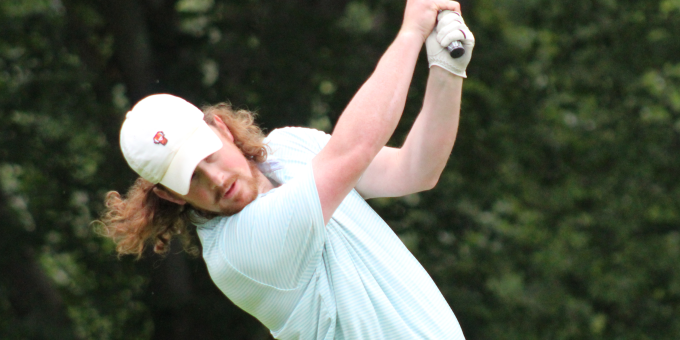 BEDFORD – Golf, like Forrest Gump’s life, can be like a box of chocolates, not knowing what anyone will bite into on any particular day. And that perfectly symbolized the opening day of the Bedford Men’s City Tournament, when a tossed salad of contenders turned into a delicious Cobb round on the Otis Park plate.

Sam Cobb, ignoring the annoying rain dressing that sprinkled the majority of the round, carded an even-par 72 to take the lead as a mixed bowl of potential first-time winners settled atop the leaderboard on a soggy Saturday. Cobb, a former Bedford North Lawrence standout and 2009 graduate, avoided major mistakes and posted four birdies to take a one-stroke lead over Daylen Tidd, with three more tours left to determine the champion.

Jalen Hodges, who went to the 72nd hole of last year’s tournament before coming short in his most serious bid for the City crown, and Michael Endris settled into third place with 74s. Defending champion Trey Turner toured in 76 as the field set the wheels in motion for possible new-breed storylines and new-name forces battling for the prize.

Cobb’s game had meat on it. He made the turn at 1-under after back-to-back birdies on the fourth and fifth holes, and he immediately went deeper into red numbers with a birdie on 10. He gave back some shots on 12 and 13, recovered with a birdie on 16, then closed with a bogey on the 18th to take the first step toward the title. He’s very aware there are a lot of steps left.

”I played well today,” Cobb said. “I didn’t think I would be leading, but I’m glad to be there. I putted pretty well, didn’t do great things but just tried to not make bogey when it was easy to do that. I just kept everything in front of me.”

Now he’s in front of everyone, although Tidd has the pedigree and firepower for the pursuit. He had only two birdies (taming the two par-5s on the front) and drifted back with three bogeys on the back (including 16 and 17 on the way down to the finish).

“I didn’t know what to expect,” said Tidd, a 2018 BNL graduate. “It was crazy. I’ve never gotten up and down more in my life than today. My putting was just money. I went out to practice last night and changed my grip, and that made something happen.”

Tidd, taking advantage of the wet conditions with his left-handed length and wedge game, overpowered the fifth and 6th holes, then made his first bogey when he went for the green off the tee on the short 12th. He made a key save after driving right in the water hazard on 15.

“I’ve never been a good rain player, but when it’s wet and not raining, those are my favorite conditions,” Tidd said. “My distance gives me an advantage. And my wedges are the next strongest thing in my game. With it as wet as it was, I could stick it close.”

In addition to Hodges and Endris lurking just off the pace, Michael Bellush shot a 75 while Jansen Perdue posted 76.

Scoring on the 12th hole reflects a mid-round rules adjustment. The pin placement (on the right side of the new portion of the green) was deemed unplayable when the first group discovered putts from below the hole would roll back beyond the original starting point. All players were granted an automatic two-putt once they reached the putting surface.

The field will be shuffled into flights following Sunday’s second round. The final two rounds are set for next weekend.