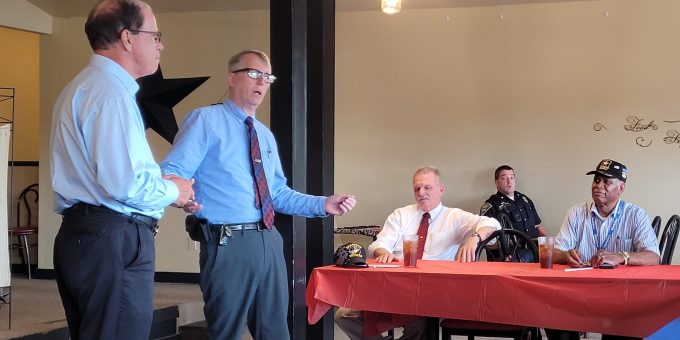 BEDFORD – United State Senator Mike Braun visited with local veterans at Smokin Jim’s BBQ and Steakhouse in Bedford Wednesday afternoon, to talk about the troubles and issues they are faced with every day.

Veterans from Lawrence, Daviess, and Monroe Counties, were able to have a one-on-one moment with Senator Braun, to ask questions about easier access to healthcare, benefits, and better communication from Washington D.C. on programs and information about various issues affecting them.

Similar discussions from previous round table discussions with Congressman Trey Hollingsworth were echoed during this event, focusing on the difficulties veterans face daily with treatments from Veterans Affairs (VA) Hospitals, and the distance they have to travel to either Indianapolis or Louisville, KY.

Senator Braun stated that issues can be remedied and issues can be discussed if veterans reach out to their local, and state officials.

“If we don’t know the issues that our veterans are facing, we won’t know how to help,” Braun said. “The VA does not share information of individuals with us for privacy and HIPPA laws, so veterans need to reach out to us for assistance.”

Each year, Senator Braun makes the effort to visit each county in Indiana to listen to the concerns of every citizen and he makes it a point to provide ample opportunities to visit with him each week.

“I make it a point every year to visit all of the 92 counties in Indiana to focus on what they are dealing with and how we can make it better in Washington D.C.,” said Braun. “I even have open office hours on Fridays at my Jasper office for anyone to come by and discuss whatever they want, for as long as they want.”

Lawrence County Veterans Affairs Officer, Brad Bough, re-shared his belief that allowing those with a VA Medical card to get services at any hospital near them should be made available for every veteran.

“It shouldn’t be hard to make this possible,” said Bough. “These VA cards should have the ability to offer coverage for our veterans, similar to how Medicaid is handled. The process has been put in place with Medicaid, so it can be done easily by partnering with local hospitals to offer these services to the men and women who sacrificed so much.”

Senator Braun advised those in attendance to contact John Webster if they have any issues in getting appointments or hitting roadblocks on issues they are dealing with, to better serve them and make it easier before leaving.