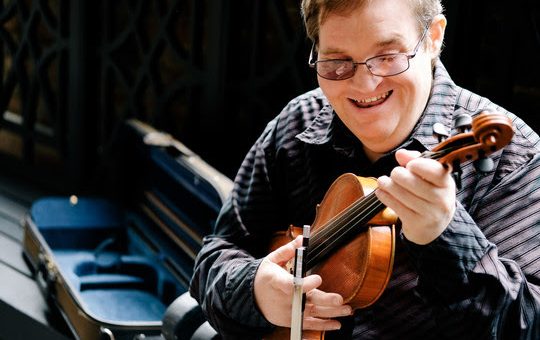 Cleveland joins nine other fellowship recipients from across the country. Each fellowship includes a $25,000 award, and all the recipients will be featured in a film that will premiere in November 2022 on arts.gov.

“In their artistic practices, the NEA National Heritage Fellows tell their own stories on their own terms. They pass their skills and knowledge to others through mentorship and teaching,” said National Endowment for the Arts Chair Maria Rosario Jackson, Ph.D. “These honorees are not only sustaining the cultural history of their art form and of their community, but they are also enriching our nation as a whole.”

“Widely considered the fiddler of his generation, Michael Cleveland is both a national treasure and a local source of pride,” said Jon Kay, Director of Traditional Arts Indiana. “His fiddling draws inspiration from the generations of old-time and bluegrass players, but his playing also pushes the boundaries of the instrument.”

Cleveland has been recognized 12 times as the IBMA’s “Fiddler of the Year” and in 2018 was inducted into the National Fiddler’s Hall of Fame. His recording “Fiddler’s Dream” was nominated in 2018 for a Grammy for Best Bluegrass Album, and in 2019, he won a Grammy for his album Tall Fiddler.