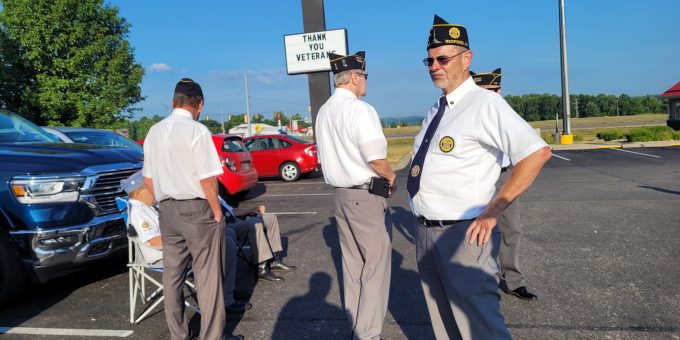 BEDFORD – The Bedford Golden Corral held a flag-raising ceremony on Monday, July 4th, to honor local veterans for their service and the sacrifices they made to keep our country safe.

The ceremony opened with prayer by Pastor Bob Courson of the Mitchell First Church of God. Members of the American Legion Gillen Post 33 Color Guard performed a gun salute for the memory of those who sacrificed their lives during the wars they fought in, with Legion Member Roger Gales playing the trumpet during the raising of the flag.

Bedford Mayor, Sam Craig, spoke during the event and asked the simple question of what does freedom mean to all of us individually.

“Today is a special day, where we remember the history of our great country and the men and women who fight to protect us and preserve our freedom,” said Mayor Craig. “Pause for a minute and think about what freedom means to you. Where would we be without freedom? We don’t fully understand what we have until we no longer have it. We need to keep fighting for what we have, and without these servicemen and women, we would not be standing here today, celebrating that freedom. Thank you for your dedication and sacrifice to protect us.”

The LTC Cladie Bailey, Chapter 2, along with the Disabled American Veterans presented Ronnie Nubbie a check in the honor of longtime member and past president Terry Sanders who passed away last March. The $500 donation to Camp Corral, which allows children of military families to have fun at a summer camp.

Sanders was a member of the Disabled American Veterans and served two terms as the Disabled American Veterans State Commander. He was a past commander of V.F.W. Post # 9107 of Mitchell, and a member of the American Legion Gillen Post #33, FRA Fleet Reserve Association. Sanders was also a recipient of both Kentucky Colonel and Saginaw of the Wabash Award for distinguished work among the veterans.

At the conclusion of the event, Father Jegan Peter with Saint Vincent DePaul Catholic Church offered a closing prayer and blessed the food that Golden Corral provided for free to Veterans.