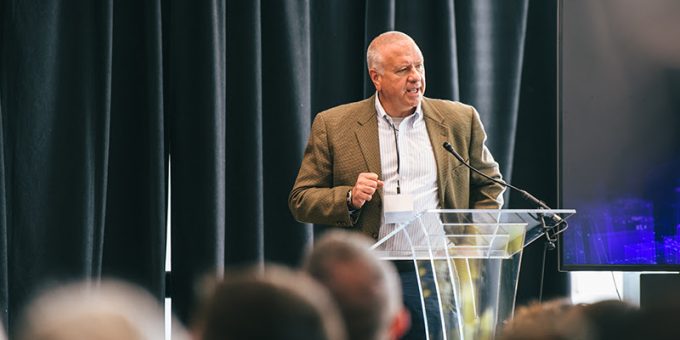 WEST LAFAYETTE — The Discovery Park District at Purdue, a $1 billion mixed-use development embedded into the fabric of the Purdue University campus, highlights the early success of a vision to establish a thriving “live-work-play” community and the impact of university-private-community partnerships.

And there’s much more to come as Purdue and its key local and global partners take the steps to capitalize on the growing national trend for those who want to live, work, play, and — at the latest — retire near a prosperous and progressive university community.

“President Daniels conceived and championed this idea as a way to build the Greater Lafayette economy while making the nearby campus environment exciting and attractive so Purdue can recruit the talent it needs for the future,” said Brian Edelman, president of the Purdue Research Foundation.

Purdue Research Foundation is leading the development of the 400-acre district. Already ahead of its 30-year timeline, the district has transformed the west end of the campus into a gateway for intellectual discourse and commercial and industrial collaboration.

According to the Indiana Chamber of Commerce, $889.5 million worth of public investment and $1.5 billion in private-sector investment flowed into Greater Lafayette from 2015-20, much of that through the Discovery Park District at Purdue.

The depth and breadth of the public-private investment project are visible through the progress in the district, which has expanded beyond the State Street Redevelopment Project and the established Discovery Park interdisciplinary research complex of facilities that Purdue launched in 2001.

Rolls-Royce, Saab, and Schweitzer Engineering Laboratories have brought millions of investment dollars to the district and have taken advantage of Purdue’s engineering and technology expertise. More importantly, they’ve added hundreds of jobs to the community.

Aerospace engine manufacturer Rolls-Royce announced plans in April to grow its already sizable and long-standing investment in the district. Through a $204 million project, the United Kingdom-based company will expand one building and construct two test facilities, creating 30 jobs that will pay average annual salaries in excess of $90,000.

Sweden-based global defense and security company Saab, meanwhile, opened its $37 million manufacturing facility last October near Maurice J. Zucrow Laboratories. Its employment is expected to reach 300 by 2027. The Saab facility, first announced in May 2019, supports the production of the U.S. Air Force’s next-generation Boeing T-X advanced pilot training aircraft, which will be used to train future Air Force pilots for generations to come.

Schweitzer Engineering opened its $20 million facility in February 2020 on the west edge of Discovery Park District on U.S. 231. There, around 70 employees focus on electric power research and development. The founder of the Pullman, Washington-based company is Purdue electrical engineering alum Edmund O. Schweitzer III, who created the first digital protective relay in 1982, revolutionizing the electrical protection industry.

These industry partnerships also represent major wins for the national security and technology initiative of Purdue’s Next Moves in advancing the university’s efforts to become the U.S. epicenter of hypersonics activity.

Convergence is now home to the Purdue Foundry, which supports Purdue’s growing startup community. The Purdue Office of Technology Commercialization and Purdue’s Office of Corporate and Global Partnerships also are housed in Convergence. Other major Convergence tenants, supported by co-working industry pioneer Carr Workplaces, include:

Discovery Park District at Purdue hosted a day of discovery and next-generation solutions on May 25, highlighting innovations such as 6G and Lab to Life for moving from testbed to scalable, real-world deployment into neighborhoods like Discovery Park District. Here’s the lineup of the panel and autonomous tech showcase videos from the celebration event: