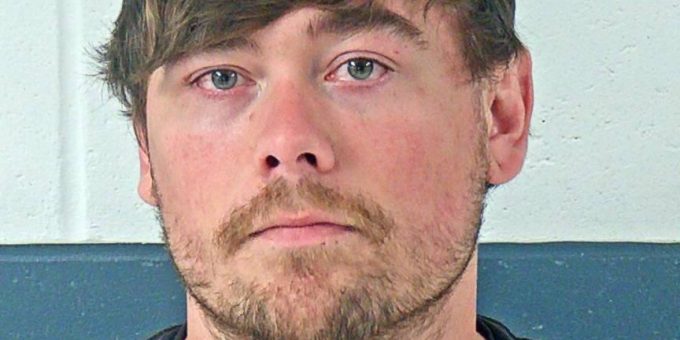 BEDFORD – A Bedford man was arrested after a domestic battery report was made at the Bedford Police Department.

When police arrived they found a woman in the lobby and a juvenile male.

They told police that 31-year-old Zachary Bombrisk had hit and choked her and was threatening to kill her.

She reported she and Bombrisk had been arguing for two days.

She said Bombrisk had came home today and was angry about the state of their car. Bombrisk allegedly struck her in the chest with the palm of his hand. She told police “the strike was hard enough to hurt but did not feel like a full punch”.

He told police they were arguing over the car not getting fixed and that the woman began hitting him in the chest with her fist.

She then stated “the way he treats her is not right and she wanted to end the relationship” to Bombrisk.

That made Bombrisk angry and he began yelling and “getting in her face nose to nose”.

The woman then left the room, but Bombrisk followed her and used a semi-closed fist to strike her in the back of the head.

Bombrisk began knocking over items on the way to the kitchen. While in the kitchen Bombrisk used one hand to grab her by the neck. He then grabbed her by the chin and held her while armed with a knife in his hand.

While attempting to leave the home, Bombrisk followed her armed with the knife and threatened the woman. He then began cutting and hitting the passenger side of the car.

The woman left with her child and went to Bedford Police Department.

The woman did not want to sign a battery affidavit and expressed fear of retaliation from Bombrisk.

Bombrisk called the woman many times while she was at the police department threatening to harm himself.

Officers located Bombrisk in the 700 block of Glendale Way where he was arrested on charges of domestic battery in the presence of a child and strangulation.