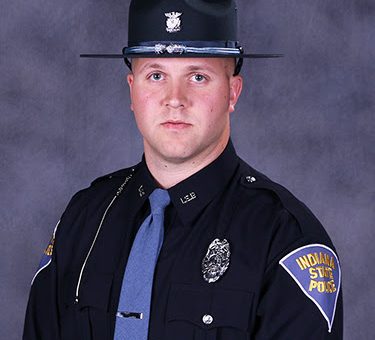 PUTNAM COUNTY – Indiana State Police Putnamville District Commander, Lieutenant David Cox, recently announced the recipient of the 2021 Indiana State Police Putnamville District Trooper of the Year. This honor is bestowed upon a district Trooper that illustrates the department’s standards and expectations as related to the mission of the department.

The 2021 Putnamville District Trooper of the Year is Trooper Andrew Mattern. Trooper Mattern’s performance and accomplishments during 2021 are worthy of such recognition and have earned him this award. Trooper Mattern is a four-year veteran of the Indiana State Police.

Trooper Mattern was overwhelmingly nominated for this award by his peers and the Putnamville District Command Team. During 2021, Trooper Mattern concentrated his traffic and criminal enforcement efforts on DUI, drug enforcement, and associated crimes. Trooper Mattern made 28 DUI arrests and 258 criminal arrests, most of which were drug and/or alcohol-related. Trooper Mattern also received a Life-Saving Award in 2021 and is the district’s award recipient for the “District Top DUI Award”.

Lieutenant Cox commented, “Trooper Mattern sets the example for other troopers to follow and he treats people with genuine respect and concern. He is a mature and conscientious trooper who has earned the respect of his peers, supervisors, and the citizens he serves. His overall dedication to the agency and its mission, his initiative, and his modesty are his outstanding attributes. Trooper Mattern is a well-rounded law enforcement professional who will undertake any task”.

Mattern resides in Vigo County with his wife Hayley.