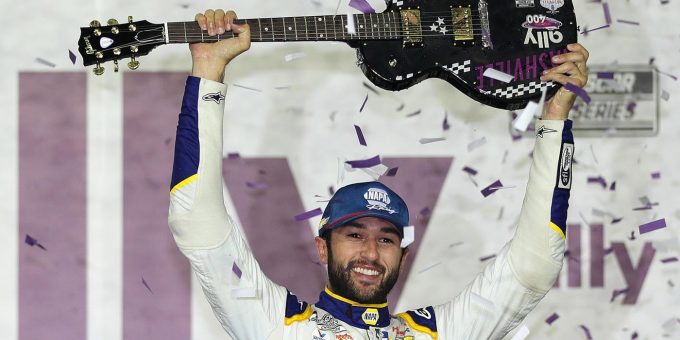 NASHVILLE, Tenn. – Chase Elliott won the Ally 400 to score his 15th career NASCAR Cup Series victory, his first at Nashville. His margin over second-place Kurt Busch was .551 of a second.

After two lengthy weather delays forced the second half of the Ally 400 to be run on Sunday night, Elliott came to life and survived a late-race caution to win at Nashville Superspeedway for his second victory of the 2022 season. Elliott becomes the fifth repeat winner of the season, and his win at Nashville marks his second this season on a concrete racetrack. Elliott previously won at Dover Motor Speedway in May.

There were 10 caution periods for a total of 57 laps.

Twenty-six of the 36 drivers in the Ally 400 finished on the lead lap.

Chase Elliott remains the championship leader after Nashville with a 30-point advantage over second-place Ross Chastain.

Harvick earned his ninth top-10 of the season and his second top-10 in two career NASCAR Cup Series starts at Nashville.

This was Harvick’s second straight top-10. He finished fourth in the series’ previous race at Sonoma (Calif.) Raceway.

The next event on the NASCAR Cup Series schedule is the Road America 250 on Sunday, July 3 at Road America in Elkhart Lake, Wisconsin. The race begins at 3 p.m. EDT with live coverage provided by USA and SiriusXM NASCAR Radio.