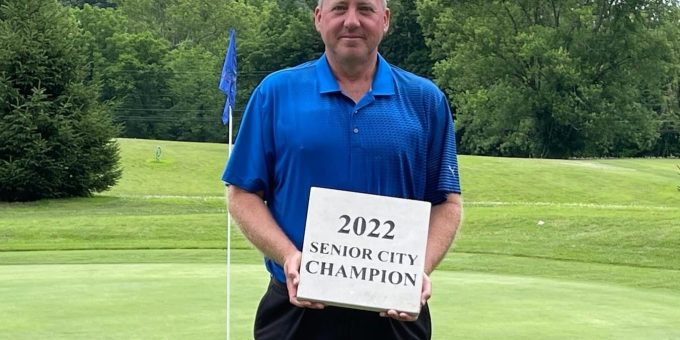 BEDFORD – Not only can Jeff Hein talk the talk, he proved he can walk the walk.

Hein, Bedford North Lawrence’s boys golf coach, displayed his playing prowess as he cruised to his first Bedford Men’s Senior City championship on Sunday at Otis Park. His victory added to the BNL flavor of the day as Jett Jones claimed the boys Junior City while Chloe McFaddin rolled to the girls Junior title.

Hein carded a final-round 72 to complete 36 holes at 4-under 140, posting a nine-shot victory over runner-up Greg Ohl. Jones rallied on the back nine to clip BNL teammate Colton Staggs by one shot in a thrilling finale to the boys Junior, while McFaddin fired a 79 in her final round during a runaway triumph in the girls Junior. Brooklynn Cromwell edged BNL girls coach and former City champion Kori Johnston for the Women’s City title.

For Hein, playing in his third Senior tournament, the key was Saturday’s explosive first round, when he carded six birdies and an eagle (on the par-5 17th hole) to claim the overnight lead. He carried that momentum into a more conservative approach to the finale, posting two birdies while avoiding major mistakes.

“I played two good rounds of golf,” said Hein, who playing resume includes five club championships in Boonville. “I played really well on Saturday. I putted well, probably made 100 feet of putts that day. I hit the ball well all weekend. As many putts didn’t fall today, but I played a solid round, played a little more conservatively.”

Jones entered the final round trailing Staggs by two shots, but he didn’t force the issue. He made two birdies on the front nine (the fifth and seventh holes), then made two key pars on the back side. The first was a crucial up-and-down from well below the 15th green. The second was on the closing 18th, when his tee shot came up short but his pitch settled a foot from the flag for a critical and clinching save.

“I didn’t try to do too much,” said Jones, who carded rounds of 76-77. “I was sticking to my game plan and let it play out. Winning means a lot. It’s fun to play against your teammates, since we played together all year. We got to push each other.”

McFaddin entered the final round with a six-shot lead, and she cemented the title with a final-round 79 for a two-day total of 164.

“It means a lot, knowing I can compete with others and still have a good time with my friends,” she said. “It was fun. Winning wasn’t the most important thing, but that made the experience even better.

“My main goal was to shoot in the 70s. My driver was pretty consistent, my irons were solid. I could have done better if my putter had been better. I will be on the putting green a lot the next few weeks (leading into the 2022 BNL season in August).”