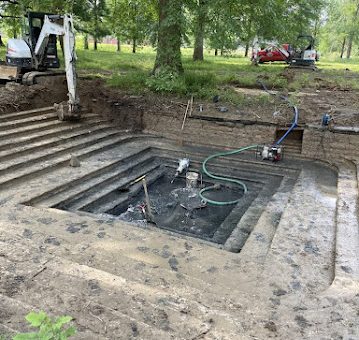 FRENCH LICK – After more than 100 years crews have uncovered the old Neptune Spring, one of four mineral springs on the West Baden Springs Hotel property.

Guests would “take the waters” from Neptune Spring in the early 1900s. Crews knew the spring was lurking beneath, and could possibly be unearthed with a little digging.

It started as an effort to move some dirt for the Bowling & Billiard Pavilion, a historic outbuilding in the West Baden Springs Hotel Gardens that is in the process of being renovated.

To the east of the gardens is what looks like a forgotten land. Nothing but grassy growth with the covering of towering trees overhead. Digging here crews revealed a network of concrete walking paths. Those paths led to an area of standing water. But from historical photos, officials knew what was likely beneath the surface so they kept digging.

Once the water was pumped out and layers of mud and sludge were removed, a piece of the hotel’s past reappeared- the Neptune Spring or Spring No. 5 as it was also known.

Officials say the steps of this basin used to be surrounded by an intricate wooden structure topped with an “onion” shaped dome.

The descending steps on the sides of the spring basin are made of cut sandstone in the late 1800s. Some of the massive cottonwood and oak trees providing shade are more than a century old. The concrete walking paths are made of cobblestone and still in decent shape, after being covered by 6 to 8 inches of soil and grass for several decades.

Neptune’s lifespan was short according to officials it was built in 1892 and removed in the late 1910s, likely falling into disrepair because of its fragile wood construction and exposure to frequent floods.

West Baden’s other nearby springs were all capped, it’s been thought that Neptune could possibly be the one and only spring that’s still active. When crews cleaned the area up and got to the bottom, the water level started to rise and the spring appeared to be flowing.

Officials plan to revitalize the walking paths to the spring and continue the cleanup of the actual spring area and hopefully open that area to the public.