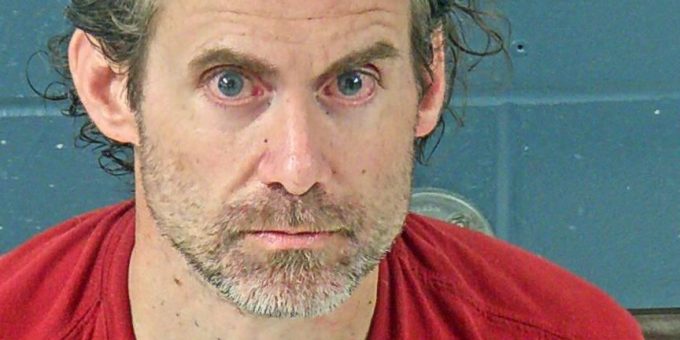 MITCHELL – A Mitchell man was arrested Wednesday after a Lawrence County Sheriff’s Department deputies were called to the area of Spice Valley Road and Thompson Lane after a report of a suspicious male.

The caller reported 41-year-old Matthew Stigall was “seeing things” and said his home was “begin tapped and being monitored”.

The caller said Stigall was being aggressive toward him.

On the way to the area, dispatch received information that Stigall and his neighbor were in a verbal argument. The neighbor said the argument turned physical and Stigall was armed with brass knuckles.

Stigall was ordered to stop. Police say Stigall was “acting very erratic, his mannerisms and movements were the same as someone under the influence of a stimulant drug”. Police said Stigall was “very panicked and paranoid”.

He then stated his dog was dying and needed some water.

The officer retrieved a bottle of water from his patrol car. Stigall then went to the passenger side of the vehicle at which time the vehicle began to roll backward. The vehicle had been left out of gear when Stigall exited the vehicle.

The officer stopped the car, and asked a second officer on the scene to place the car in park.

On the passenger side of the vehicle, the officers found Stigall holding his English Bulldog. The dog was overheated and breathing rapidly and was in distress.

The officer had Stigall place his dog in the front seat of the patrol car to cool the animal in the air conditioning.

As the officer turned around he found Stigall at his side armed with a pair of needle-nose pliers. Stigall had brass knuckles and a wrench in his left hand. Both officers then grabbed Stigall’s arms and ordered him to drop the items.

Stigall refused to drop the items and began physically resisting the officers and attempting to get away. One of the officers took Stigall to the ground.

Stigall continued to resist and refuse to put his hands behind his back. The officer finally used his ECW device and gained control of Stigall and he was detained.

Officers continued to check on the dog named Ruger and waited for a third officer to transport the dog to a local veterinarian for treatment.

The third officer arrived with cold packs and water for the dog to cool him. Ruger stopped breathing and became very still.

The dog died upon arrival at Springmill Veterinarian Service on State Road 60 East.

Police say the dog had been in Stigall’s vehicle most of the day. Only one window of the vehicle was rolled down.

Stigall was transported to IU Health Hospital to be medically cleared and was then transported to the Lawrence County Jail on charges of animal cruelty, resisting arrest by force, disorderly conduct, and public intoxication.