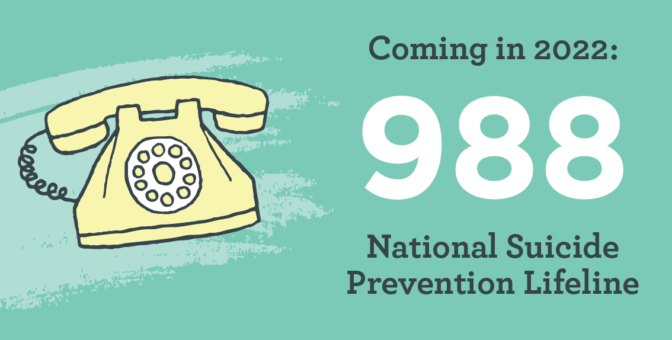 INDIANA – Nearly half a million lives (480,622) were lost to suicide from 2010 to 2020. During the same period, the suicide death rate increased by 12% and as of 2009, the number of suicides outnumbered those caused by motor vehicle accidents.

On July 16, 2022, the federally mandated crisis number, 988, will be available to all landline and cell phone users, providing a single three-digit number to access a network of over 200 local and state-funded crisis centers. 988 callers who are suicidal or experiencing a mental health crisis will be routed to the National Suicide Prevention Lifeline and connected to a crisis counselor where they may receive crisis counseling, resources, and referrals, and in some cases and where available, mobile crisis units may be dispatched.

While 988 is intended to help fill gaps in the behavioral health crisis continuum, there is concern about the National Suicide Prevention Lifeline’s readiness to handle the increased volume, which is expected to triple from 4 up to 12 million calls in the first year alone.

In the first three months of this year, Indiana answered 3 out of 4 in-state calls to the National Suicide Prevention Lifeline, which is about average. The rest of the calls were redirected to other states, and about 12 percent of calls from Indiana during that time period — a little more than 1,000 — dropped off before anyone answered.

An analysis of Suicide Prevention Lifeline data reveals that nationwide during the same time period, 18 percent of all calls were abandoned before the caller got help.

The federal government mandates 988, but states are responsible for most of the funding and implementation. Almost one month before 988 launches, many crisis counselor hotline positions remain unfilled, a long-term funding strategy is unclear, and the community crisis infrastructure varies greatly across states and localities. While 988 is expected to improve the delivery of mental health crisis care, it is unknown how well it will address the needs of those who are most vulnerable, including some people of color, males, younger individuals, and individuals living in rural areas.

Mental health advocates say state-level funding is needed to sustain crisis services. But for now, there is no state funding for the 988 hotlines in Indiana. FSSA will use federal funding to increase call center capacity.

Federal funding to help scale up staffing at call centers includes $105 million dedicated to hiring at local centers across the country. That money is being channeled through state-level agencies.

The state will continue to operate its 211 lines, a phone and text line that connects Hoosiers to local resources including food pantries, homeless shelters, and mental health crisis services.