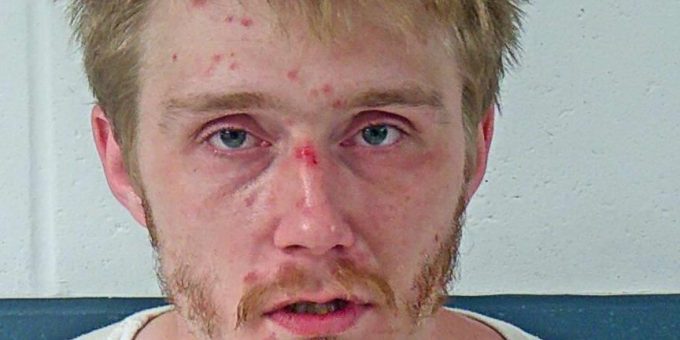 BEDFORD – A Bedford man was arrested Monday morning after Bedford Police officers were called to the area of 18th and O streets to investigate a report of a suspicious male in the area.

Dispatchers received three 911 calls reporting the male was acting erratically. The callers described him as a white male wearing a white t-shirt, black jacket, gray pants, and white shoes. While driving south on O Street, an officer located the male stumbling into the roadway.

Another male ran into the roadway to stop traffic so the man would not get hit by a vehicle.

The male stumbling in the roadway was 25-year-old Dakota Norman.

Officers said Norman was “sweating profusely and could not stop moving”. The officer noticed Norman was clutching a capped syringe in his left hand. He was ordered to drop the syringe and was detained.

In Norman’s pant pocket officers found a plastic container containing a baggie of fentanyl and a digital scale. Norman also had a black metal lock box in his possession.

Norman was transported to the Bedford Police Department for processing.

Norman told police he had used fentanyl about an hour or so before police stopped him.

When asked about the lock box, Norman told police it belonged to his brother, Damon Norman, who is in jail. Norman said he had been trying to break into it to get what was inside. He said he did not know what was in the lock box and that he did not have permission to take it.

Norman then asked for medical treatment because his arm was hurting and he was dehydrated.

The black lockbox was secured at the Bedford Police Department and Damon Norman was advised to collect it when he is released from jail.