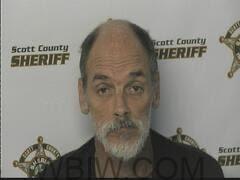 On June 13, 2022, ISP Trooper Christopher Rainey began an initial investigation into allegations of possible child molestation after the mother of the victim contacted authorities. The mother stated the victim was a child under the age of 14.

After the initial allegations, ISP Detective Matt Busick continued the investigation with the assistance of the Indiana Department of Child Services. As a result of the investigation, Detective Busick discovered that the alleged molestations occurred multiple times between January and June of this year. The suspect 49-year-old Tyson Myers, left his place of work after hearing the mother had contacted police and then fled the area. After leaving, Tyson Myers did not return to work or to his current home in Austin.

As the investigation continued, Detective Busick obtained an arrest warrant and began a search for Myers.

On Monday, Detective Matt Busick found Tyson Myers hiding at a rural Jackson County residence.  Myers was taken detained and transported to the Scott County Jail without further incident on seven felony counts of child molesting, and one count of dissemination of matter harmful to minors.

Detective Busick was assisted by Trooper Christopher Rainey and Deputies from the Jackson County Sheriff’s Department.