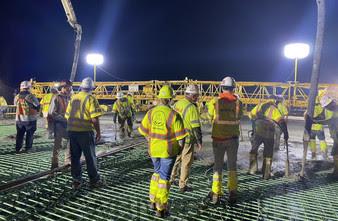 INDIANA – Tomorrow marks the official first day of summer, but it feels as if summer has already arrived in Central Indiana. With temperatures last week well over 90 degrees Fahrenheit with extreme heat indexes, and a similar forecast for this week, Finish Line crews have taken extra precautions to stay safe while working outdoors.

Daily safety meetings stress the importance of staying hydrated throughout the day. Crew members are encouraged to begin hydrating before hitting the job site and to continue to hydrate throughout the workday. On days with a high heat index, some work will start early in the morning to avoid the hottest times of the day.

Certain operations, such as asphalt paving and concrete pours, will flip schedules to allow for crews to work in the evenings or overnight when it cools down.

Click here to read more about the traffic shift.

Motorists will see significant progress along the Madison Avenue bridge as crews complete the bridge deck pour over the weekend. I-465 traffic should still anticipate nightly single and double-lane closures as crews continue bridge work at Mann Road and Madison Avenue.

Following the fiery incident mentioned in last week’s On Track, Finish Line crews were able to quickly repair an 80-foot section of the southbound lane of S.R. 37. Paving crews will continue to monitor the status of the temporary pavement before laying the final layer of asphalt.

County Road 144 east of S.R. 37 closed this morning for four weeks as crews will begin drainage improvements on the eastern portion of the S.R. 144/S.R. 37 interchange.

An additional two-week closure is expected as the Johnson County Highway Department will be replacing three culverts along C.R. 144 between S.R. 37 and Smokey Row Road.