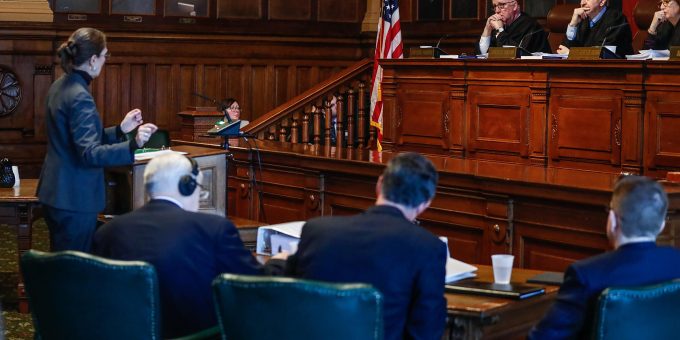 BLOOMINGTON – Today, the Hoosier Environmental Council (HEC) wishes a warm farewell and many thanks to its long-time Senior Attorney Kim Ferraro, who is leaving HEC after 11 years to become the Senior Staff Attorney at the Conservation Law Center (CLC), effective August 1st.

Over its 39-year history, HEC has become Indiana’s leading environmental educator and policy advocate, known for its impactful work that has moved state lawmakers and regulators to enact policies that advance environmental health and justice, a sustainable economy, and the protection of wildlife habitat and natural resources. When Ferraro joined HEC’s team in 2011, legal advocacy became another pillar for advancing HEC’s mission.

Ferraro began her legal career in 2007 by founding the Legal Environmental Aid Foundation (LEAF), the only non-profit dedicated to providing free legal aid in environmental matters to Indiana’s disadvantaged communities that are so often the most impacted by pollution but unable to afford the high cost of hiring a private attorney or pursuing litigation. Since then, Ferraro has devoted her legal practice to empowering vulnerable communities to stand up in court against big-money special interests harming the environment. And that practice, along with LEAF’s mission, was formally adopted by HEC through a corporate merger with LEAF in 2011.

As director of HEC’s legal program, Ferraro was the force behind numerous precedent-setting victories in federal and state courts that have held both violators and regulators accountable and enforced the laws and policies meant to protect the environment and human health. Among other successes, her legal advocacy stopped several factory farms from endangering the health of Hoosier communities, required the cleanup of millions of tons of steel-making waste dumped within feet of Lake Michigan, and put an end to toxic exposures suffered by a low-income community in Elkhart from a nearby industrial waste processor, prevented a dangerous ethanol refinery from being built near the Kankakee River and required federal agencies to enforce existing protections for the state’s few remaining wetlands.

Ferraro has also been an integral part of HEC’s policy team, providing bill analyses and helping to develop and implement strategies to further the organization’s legislative priorities. As part of that work, she led successful campaigns that defeated numerous bills that would have further eroded the legal rights and protections for people suffering from factory farm pollution and she helped establish HEC’s sustainable food and farming program, which will continue after Ferraro leaves.

“It has been an honor and a privilege over the last decade to work side-by-side with some of the most highly skilled, dedicated, and respected environmental policy experts, as well as HEC’s extremely talented, collaborative, and passionate team of outreach, communications, and development professionals,” said Ferraro. “Working with colleagues who are so dedicated to HEC’s mission and protecting our environment has been deeply inspiring. HEC’s staff, supporters, and partners are all committed to safeguarding Indiana’s natural heritage so that our children have a place to call home that sustains them in the future. I am so proud of HEC’s achievements and look forward to continued collaboration with my HEC family in my new role at CLC.”

Tom Barrett, HEC’s Board President shared, “On behalf of HEC’s staff and board, I am sorry to see Kim go. In her 11 years at HEC, she has achieved a strong track record of success – in the courts, at the Indiana General Assembly, and in communities across Indiana – to improve environmental conditions in our state. However, her move to the Conservation Law Center is not really a ‘goodbye’, since her excellent work for Indiana will continue.  The Hoosier Environmental Council has always had a great working relationship with the Conservation Law Center; Kim’s new position there will only strengthen it as HEC and CLC continue to partner on environmental legal cases going forward.”

In her new role, Ferraro will lead the Conservation Law Center’s growing docket of litigation, including continuing to represent HEC in ongoing cases. She will assist with CLC’s state and national legislative efforts to protect public lands, cherished wild places, threatened and endangered species, and freshwater ecosystems. Additionally, Ferraro will help teach law students in the practice of environmental and conservation law as a clinical professor with CLC’s Conservation Law Clinic through Indiana University’s Mauer School of Law (IU Mauer).

“I am deeply committed to continuing my legal career in the advancement of environmental protection, conservation, and sustainability so that future generations – including my children and grandchildren – have a livable planet on which to thrive,” said Ferraro. Training the next generation of public interest environmental and conservation-minded lawyers is key to that cause. I am thrilled to be part of the growing team at CLC, a highly respected law firm at the forefront of doing just that.”

CLC was formed in 2005 to provide legal counsel without charge to non-profits and other organizations in conservation matters, and to offer second and third-year law students attending IU Mauer hands-on experience in a live clinical setting. Since then, CLC has helped more than 100 conservation organizations on countless projects in Indiana and across the world, while training hundreds of young attorneys in the practice of environmental law, many of whom have called the experience the most impactful of their career.

Among other successes, CLC has helped permanently protect at least 13,000 acres of important and sensitive habitat in Indiana and beyond, achieved a landmark legal victory in the Indiana Supreme Court affirming the public’s right to access and enjoy Lake Michigan’s shoreline, and led the Indiana Water Project, a statewide study on Indiana’s water infrastructure that continues working to improve state water law and policy. Most recently, CLC helped lead the effort to designate more than 3.5 million acres in southern Indiana as a federal Sentinel Landscape, one of only ten such areas in the country. Partnering with the U.S. Department of Agriculture, Department of Defense, Department of Interior, and other partners, CLC manages the Southern Indiana Sentinel Landscape, one of the largest conservation projects ever undertaken in the Midwest. The project seeks to protect our nation’s military bases (including four in southern Indiana), protect Hoosier water quality and important wildlife habitat, and connect private landowners in Southern Indiana with state and federal conservation funding programs to implement best land management practices.

“Conservation Law Center is excited to have Kim Ferraro join our team,” said Christian Freitag, CLC’s Director and Associate Clinical Professor at Indiana University Maurer School of Law. “Things don’t get better by accident. Things get better because people like Kim earn it for all of us, as she’s done for years. CLC is working to make our environment in the Midwest and around the world healthier and more resilient for us all, and we know Kim will help the cause. I’m proud to have her as a colleague.”

Ferraro is a graduate of Valparaiso University School of Law and DePaul University. She is dual-licensed to practice in Indiana and Illinois and is admitted to the bars of the U.S. Northern and Southern District Courts of Indiana, the Seventh Circuit Court of Appeals, and the U.S. Supreme Court. Born and raised in Austin, Texas, Ferraro moved to Chicago in 1989 where she raised her two daughters and worked as a litigation paralegal before moving to Valparaiso, Indiana, in 2004 to attend law school. She now lives with her husband and three dogs in Michigan’s Upper Peninsula where she enjoys birdwatching, hiking, skiing, and kayaking in and around Lake Superior. Ferraro will work out of CLC’s offices and reside in Bloomington, Indiana during the school year.