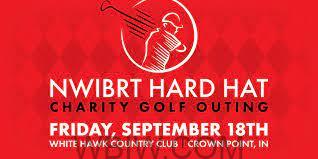 This year, the committee is again working to achieve such high donation amounts for 2022’s recipients. The selection of this year’s recipient organizations is ongoing and will be announced prior to the golf outing.

Remaining proceeds from the event will be used to support safety and educational programming for NWI businesses through NWIBRT’s collaborative initiatives.

The 2022 NWIBRT Hard Hat Golf Committee will include:

“The NWIBRT Hard Hat Golf Outing is a lot of fun, and it’s also a very unique event that brings together companies from all over the region. Even though some may be competitors, they all come together under NWIBRT to develop new ways to improve safety on job sites. That’s pretty special,” said Tina Stevens.

Gozdecki added, “And in addition to the safety training this event will help fund, we’re also very proud to be able to give back to several great organizations that improve the quality of life for lots of people here in Northwest Indiana. Last year we were blown away by how much was raised for charity – $25,000. This year, we’re aiming to do it again or even better.”

The 2022 NWIBRT Hard Hat Charity Golf Outing is scheduled for September 16th at the White Hawk Country Club in Crown Point, IN.