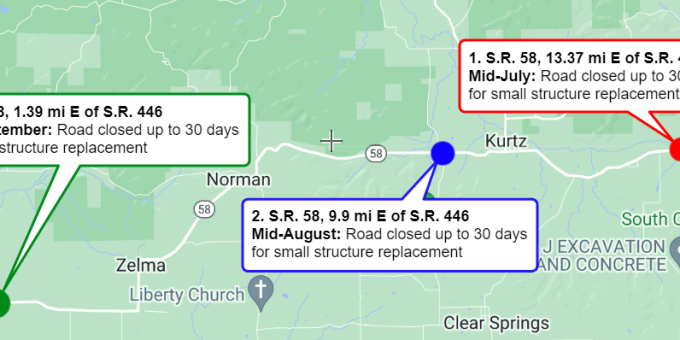 JACKSON/LAWRENCE CO.— Indiana Department of Transportation contractor Five Star Company plans to close sections of S.R. 58 starting in mid-July, to complete a series of small structure replacements between S.R. 135 and S.R. 446 in Jackson and Lawrence Counties. The road was originally scheduled to close in early May but has again been delayed due to utility conflicts. State Road 58 will close for up to 30 days at each of the following locations:

The $1 million contract was awarded to Five Star in February, with a completion date in late October. Traffic will be routed along the official detour, which follows S.R. 446, U.S. 50 and S.R. 135. Access will be maintained for local residents; thru traffic should use an alternate route.

INDOT reminds drivers to slow down, avoid distractions, and consider worker safety when traveling through active construction zones. All work is weather-dependent and schedules are subject to change.