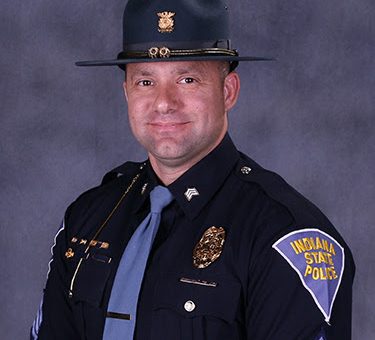 BLOOMINGTON – The Superintendent of the Indiana State Police, Douglas G. Carter, has announced the promotion of Sergeant Michael Wood to the rank of First Sergeant. F/Sgt. Wood will serve as the Assistant District Commander and oversee the district facilities and resources along with being the district administrator and acting commander when designated.

Wood is a native of Spencer, Indiana, and a 1996 graduate of Owen Valley High School. In December of 2002, he earned a bachelor’s degree from Indiana State University.

On July 8, 2007, F/Sgt. Wood graduated from the 67th Indiana State Police Recruit Academy and was assigned to the Putnamville Post. Wood patrolled Putnam County until 2016 when he was then promoted to the rank of Sergeant and began his role as the Indiana State Police Academy Assistant Commander for the 76th through the 80th Recruit Academies. He continued in this position until December of 2020 when he was promoted as the Public Information Officer (PIO) for the Bloomington District.

During his career, F/Sgt. Wood has served as a member of the Tactical Intervention Platoon and Meth Suppression Section after he received federal certifications through the Drug Enforcement Administration (DEA) in clandestine laboratory investigations at the DEA Headquarters in Quantico, Virginia. Other experience includes being a Field Training Officer (FTO) for the 69th through the 74th Recruit Academy graduates along with being an Indiana Law Enforcement Training Board-approved Instructor. He served as an academy counselor for the 75th Recruit School and has graduated from the Indiana State Police Leadership Academy. In 2008, F/Sgt. Wood was awarded the Putnamville Post, “Trooper of the District.”

First Sergeant Wood and his wife Cristi reside in Owen County with their daughters Kloee and  Campbell and son Auggie.