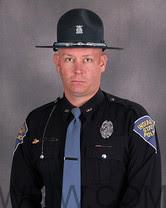 GREENE CO. – Following a competitive promotional process, Indiana State Police Superintendent Douglas G. Carter has announced the promotion of Trooper Brad Stille to the rank of First Sergeant where he will serve as District Investigative Commander for the Bloomington District Field Investigations.

Stille graduated from Edgewood High School in 1994 and he was hired as a Deputy for the Greene County Sheriff’s Office on February 11, 2001. Later that year, he graduated from the Indiana Law Enforcement Tier I Basic Academy to become a state-certified police officer. After serving over five years with the Greene County Sheriff’s Office, he was accepted into the 66th Indiana State Police Academy. This was the first-ever lateral academy where all attendees were prior certified law enforcement officers. Stille graduated from the ISP Recruit Academy and was appointed a Trooper in November 2006.

First Sergeant Stille was assigned to the Bloomington Post where he worked road patrol until he was promoted to Trooper Detective in 2008. Since then he has been awarded Outstanding Investigation Award in 2013 for the murder investigation of Katelyn Wolfe that led to the convictions of two men.

First Sergeant Stille has since graduated from the Indiana Institute of Technology in 2022 with a Bachelor’s Degree in Criminal Justice. He and his family have called Greene County home since 1994.