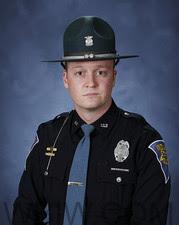 Detective Whyte is an 8-year veteran of the Indiana State Police. He is a 2009 graduate of Mooresville High School and a 2013 graduate of IUPUI where he earned a Bachelor’s Degree in Criminal Justice with a Minor in American History. Before being employed with ISP, Whyte volunteered as a Reserve Police Officer for Brooklyn PD in Morgan County for one year.

In May of 2014, Whyte graduated from the 73rd Indiana State Police Recruit Academy and was then assigned to the Bloomington Post, where he has primarily worked in Lawrence County. During Whyte’s 8 years as a Trooper he has served as a Field Training Officer (FTO), Tactical Intervention Platoon team member, Background Investigator, Marijuana Eradication team member, First Aid/Tac Med Instructor, Speed Timing Device Instructor, Crash Reconstructionist, Small Unmanned Aircraft System Pilot (Drone), and a member of the Explosive Ordinance Disposal team. Whyte is also a Certified School Resource Officer for the Eastern Greene School Corporation.

In his new position, Detective Whyte will conduct Internet Crimes against Children investigations throughout the Central and Southern parts of Indiana with other detectives to combat child pornography and child exploitation.

Detective Whyte is married and lives in Lawrence County wife his wife Kegahn and two daughters Madalyn and McKenna.