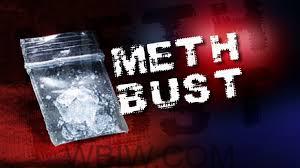 SEYMOUR – A Seymour drug operation that was selling methamphetamine to an estimated 30 people per day was busted Sunday and three people have been charged, said Sheriff Rick Meyer.

“This appears to have been a major drug-dealing operation based in an apartment complex,” said Sheriff Meyer. “These arrests were the result of excellent police work and cooperation between departments. I’m proud of the effort all officers involved put forth, including Deputy Aaron Wilkins, Deputy Justin Amos, and Detective Zach Elliott, along with Seymour Police Department Detective Adam Surface and Detective Matt Carver.”

The three were arrested Tuesday and charged in Jackson County Circuit Court.

According to the police report, officers found a total of approximately 54 grams of methamphetamine, approximately 1.2 ounces of marijuana, a prescription medication for which the occupants did not have a valid prescription, drug paraphernalia, and nine cellphones.

The police report also alleges that when police searched Sizemore, they found drugs and paraphernalia on his person.

“Eliminating this amount of drugs from our community makes our citizens a little bit safer and I am proud of the police work that went into these arrests,” said Sheriff Meyer.

All charges filed in this case are merely allegations and all suspects are considered innocent unless and until proven guilty in a court of law.