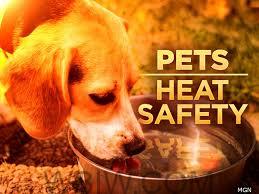 INDIANA – Any time your pet is outside, make sure they have protection from heat and sun and plenty of fresh, cold water. In heat waves, add ice to water when possible. Tree shade and tarps are ideal because they don’t obstruct airflow.

A doghouse does not provide relief from heat – in fact, it makes it worse.

Take care when exercising your pet. Adjust intensity and duration of exercise in accordance with the temperature. On very hot days, limit exercise to early morning or evening hours, and be especially careful with pets with white-colored ears, who are more susceptible to skin cancer, and short-nosed pets, who typically have difficulty breathing. Asphalt gets very hot and can burn your pet’s paws, so walk your dog on the grass if possible. Always carry water with you to keep your dog from dehydrating.

“It’s important to remember that it’s not just the ambient temperature, but also the humidity that can affect your pet,” says Dr. Barry Kellogg, VMD, of the Humane Society Veterinary Medical Association. “Animals pant to evaporate moisture from their lungs, which takes heat away from their body. If the humidity is too high, they are unable to cool themselves and their temperature will skyrocket to dangerous levels – very quickly.”

Animals are at particular risk for heat stroke if they are very old, very young, overweight, not conditioned to prolonged exercise, or have heart or respiratory disease. Some breeds of dogs like Boxers, Pugs, Shih Tzus, and other dogs and cats with short muzzles will have a much harder time breathing in extreme heat.

Move your pet into the shade or an air-conditioned area. Apply ice packs or cold towels to their head, neck, and chest, or run cool (not cold) water over them. Let them drink small amounts of cool water or lick ice cubes. Take them directly to a veterinarian.

An Evansville man is facing neglect charges after police say he left two dogs to die outside in the heat.

Evansville Police officers arrested 49-year-old Jolan Hunter Monday after they found the dogs dead in his backyard in the 900 block of North Lincoln Park Drive.

Animal Control Officer Kenneth Kamp was called for four dogs at a home who were in need of help due to the weather conditions. Kamp says he contacted dispatch after he arrived and found one of the dogs had died from heat exhaustion.

According to a probable cause affidavit, when police arrived they attempted to contact the homeowner by knocking on the door, but there was no answer. Officer Kamp then informed officers that he found a second dog who had died while they were on the scene trying to move them to an air-conditioned environment.

They say there wasn’t any water or shade. Monday’s high in Evansville was 97 degrees.

Hunter explained to officers that typically he had a tarp covering the top of the dog’s enclosure, however, they had torn it apart and his juvenile son threw it away. When police asked Hunter about the last time the dogs were checked on he told them around 10 a.m. by his son that morning, but investigators believe that was a lie because there was an active protective order in place between Hunter and his son.

Hunter was arrested and taken to the Vanderburgh County Corrections Center and is being held on a $400 bond on four counts of neglect of an animal.