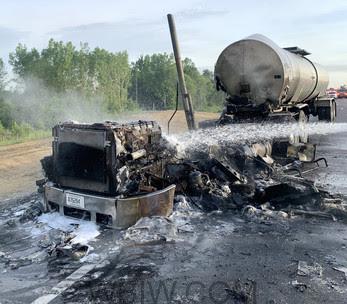 INDIANA – Friday’s fiery crash in the new, elevated I-69 section between Southport and Wicker roads was a test for years of work zone safety and incident management planning. The I-69 Finish Line project team has been meeting regularly with local officials and emergency response representatives since early in project development to share traffic plans and address any concerns.

According to police, the tanker truck lost a tire, then struck the guardrail and temporary median barriers. These protections minimized the severity of the crash. Contractors working in the area kept traffic away from the fire until first responders arrived, and weekend crews repaired the pavement and cleaned up spilled diesel fuel.

The project team and first responders also coordinate on transporting injured motorists and reopening the road as quickly as possible. With the new interstate highway and its construction, there are limited points where traffic can enter and exit. Police may need to divert traffic onto a suitable alternate route upstream from the incident.

Drivers should expect lane closures near the crash site this week for guardrail repairs. The pavement will be smoothed over later in construction when the final layer of pavement is added through the entire area.

Demolition crews removed the Mann Road bridge over I-465 last week for a replacement.

The I-465 exit ramp remains open to one-way traffic turning north onto Mann Road, with the traffic signal temporarily replaced with a yield sign.

Expect ongoing nighttime lane closures for bridgework and median barrier removal along I-465 between S.R. 67/Kentucky Avenue and Keystone Avenue.

Utility crews are installing new lines near the Belmont and Epler Avenue intersection to clear the way for construction. Belmont is closed except for local traffic south of Epler Avenue.

Expect a full closure of Belmont and Epler avenues west of S.R. 37 in July to build the future I-69 interchange.

Click here for a map of the closure locations.

State Road 252 and Cramertown Loop are expected to reopen today at a new roundabout, just east of I-69. Watch for daytime flaggers as crews are putting the finishing touches on the area. Ongoing work in this area for the next few weeks includes bridge beam painting, multi-use path installation, final paving, and striping work.

Watch for changing traffic patterns on I-69 and S.R. 37 this week. Daytime crews are installing permanent pavement markings north of Martinsville as weather allows and bridgework near Teeters Road may require lane closures.

Nighttime crews will be paving at the S.R. 39/Morton Avenue ramps and roundabouts and at the south end of the project this week near Indian Creek.