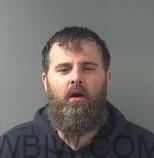 BLOOMINGTON – A woman who was walking her dog died from her injuries after being struck by a vehicle Friday night in Bloomington.

According to Monroe County Sheriff’s Office Lt. Troy Thomas, the woman was struck by a vehicle at 8:45 p.m. while she was walking her dog near the Monroe County Airport on Airport Road near the intersection of Kirby Road.

Stacy Lamb, 50, of Bloomington, was taken by ambulance to IU Health Bloomington Hospital where she died from her injuries.

Caleb Washburn, 33, of Bloomington, was arrested on a charge of operating a vehicle while intoxicated causing death and driving while his driver’s license was suspended. Police say Washburn lives about two miles west of the crash site.

Sgt. Bennett Dillion from the sheriff’s department is reconstructing the accident to determine how it happened.